Showing posts from October, 2011
Show all

The daily life of an Indian middle class Person 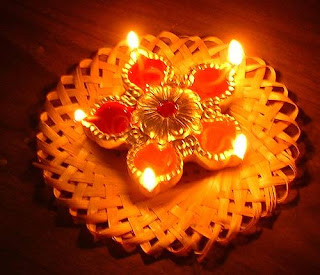 - October 22, 2011
http://www.outlookindia.com/article.aspx?278635#.TqJ3gr238a0.blogger   What began as a few whispers is now a booming drumbeat. Powerful senior ministers are asserting that the Right to Information Act (RTI), till now flaunted as one of the UPA government’s biggest gifts to the aam aadmi, is “transgressing into government functioning”. Similar misgivings are being voiced on another constitutional body that has been in the news lately—the Comptroller and Auditor General of India (CAG). Put together, this has raised fears of a possible attempt to muzzle the proverbial messenger. “The government has not made it clear what can or cannot be made public, which is what’s leading to controversies.”Sudha Pai, Professor, JNU   “Both (RTI and CAG) are messengers that bring to people something that has been stolen or gone wrong,” says former CAG T.N. Chaturvedi. But that’s not how a beleaguered government is seeing it. Facing varied governance scandals, it says that RTI is being misused for poli
Post a Comment
Read more 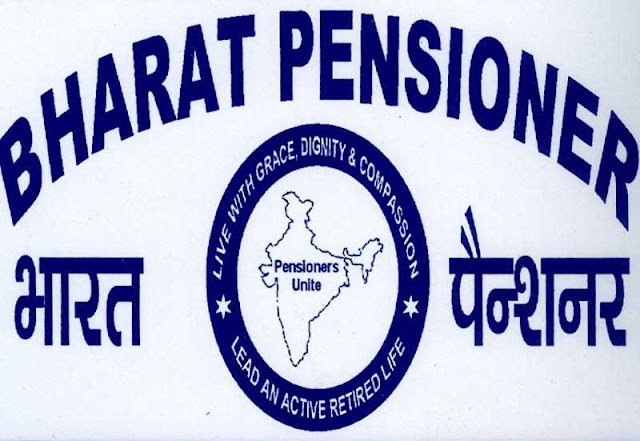 Greeting, Wish You all a very happy Depawali Important announcements :1   56 th AGM of Bharat Pensioners Samaj is scheduled to be held on 04.011.2011 from 10.00hrs onwards in Bhartiya Vidya Bhawan, Kasturba Gandhi Marg, New Delhi 11001.All members Affiliates & supporters are cordially invited. BPS announces winners of 2011 awards 2. With the intention of developing healthy competition and to encourage better service to Pensioners by its affiliated Associations. Bharat Pensioners Samaj, introduced PEMS i.e. Performance evaluation & monitoring system, under which best performing Association of the year is rewarded    Batta Memorial Trophy    with a cash Prize of Rs 5000/. From    2010    a    Spl. Prize Trophy plus two runners-up cash prizes were added to this system. From this year replacing the Spl prize Trophy , BPS announces introduction of Daya Maheshwari memorial Trophy with cash prize of Rs 5000/- This year's result for winners of these prizes is as follows as f
Post a Comment
Read more 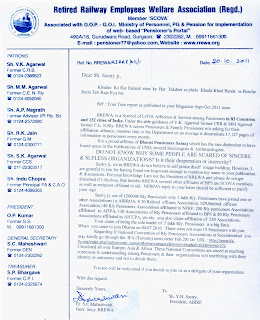 - October 20, 2011
To Y.N. Sastry, President AIRRF Secuderabad. Reference : Your Delhi Tour report as published in AIRRF magazine September-Oct.2011 Dear Sh. Sastry ji, Khudee   Ko Kar Buland   etna   ke   Har   Takdeer se phele   Khuda Khud Bande   se Punche Batta Teri Raja Kya hai RREWA, is a Symbol of LOVE Affection & Service among Pensioners in 83 Countries and 132 cities of India. Under the able guidance of V.K. Agarwal former CRB & MM Agarwal former C.E. N.Rly. RREWA serves Pensioners & Family Pensioners w/o asking for their affiliation, alliance, member ship or the Department on an average it disseminate 17,127 pages of information to pensioners every month.   It is a proud affiliate of   Bharat Pensioners Samaj   which has the rare distinction to have found space in the Publications of UNO, several Sociologists & Anthropologists. DO NOT KNOW WHY SOME PEOPLE ARE SCARED OF SINCERE & SLFLESS ORGANIZATIONS? Is it their desperation or insecurity? Sastry ji, we in RREWA do n
1 comment
Read more

WHY SOME PEOPLE ARE SCARED OF SINCERE & SELFLESS ORGANIZATIONS/PERSONS 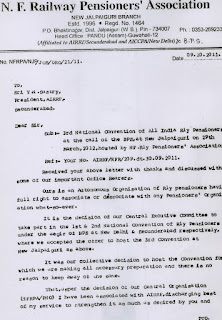 RREWA A Symbol of LOVE Affection & Service in 83 Countries and 132 cities of India Under the able guidance of V.K. Agarwal former CRB & MM Agarwal former C.E. N.Rly RREWA serves Pensioners & Family Pensioners w/o asking for their affiliation, alliance ,  member ship or the Department .   It is a proud affiliate of Bharat Pensioners Samaj which has the rare distinction to have found space in the Publications of UNO, several Sociologists & Anthropologists. DO NOT KNOW WHY SOME PEOPLE ARE SCARED OF SINCERE & SLFLESS ORGANIZATIONS? Is it their desperation or insecurity? Visit our website Mr Sastry :  www.rrewa.org Adesperate & confused  Y.N. Sastry PRESIDENT AIRRF 's  report as published in Railway Federation News Sept.-Oct.2011 issue In view of the SCOVA meeting being held on 21-09-2011 at New Delhi, the important Central Office bearers from different railways have been invited to be at Delhi on 20-09-2011 morning. Sri M.M.P. Sinha, E.C.RIy. with 3 members,
Post a Comment
Read more

HOW THE SOLICITOR GENERAL IS BLUFFED BY THE MINISTRIES

HOW THE SOLICITOR GENE RAL IS BLUFFED BY THE MINISTRIES IN BRIEFING THEM? HOW THE COURTS IN TURN GIVE VERD ICTS BASED ON THE “BLUFF-BRIEFS” PRESENTED AND  ARGUED BEFORE THEM BY SUCH SOLICITOR GENERALS!! READ THIS RECENT CASE- AN EYE OPENER- WE NEED TO BE ALERT ALWAYS ABOUT GOVT BLUFFS IN “COUNTERS”! MORE OFTEN THAN NOT THE DEPTS CONCEAL FACTS AND COVER UP THEIR OMISSIONS AND ERRORS WITH BLUFFS!-Courtesy: N Natrajan - Chennai
Post a Comment
Read more

RIGHT TO INFORMATION- A FUNDAMENTAL RIGHT?

- October 15, 2011
RIGHT TO IN FORM ATION- A FUNDA MENT AL RIGHT? Naveen Tewari Published in: The Hindustan Times, 13 October 2011 ************************ THE FIRST SHOCK CAME WHEN THE U.P. GOVERNMENT APPOINTED THE STATE CHIEF INFO RMATION COMMISSIONER AND THE IN FORM ATION COMM ISSIONERS. ALARM BELLS STARTED RINGING IN OUR MINDS. THE APPOINTMENTS RAISED SERIOUS QUESTIONS ABOUT HOW SERIOUSLY THE GOV ERNMENT OF UTTAR PRADESH HAD TAKEN THE IMPLEMENTATION OF THE ACT IN LETTER AND SPIRIT The Right to Information Act was passed in India in the year 2005. But the founding fathers of our constitution had already enshrined it in the constitution as a fundamental right under article 19(1-a). The right was not exercised by the people due to their general ignorance of law and also because it was not developed into an implementable form with a delivery mechanism and system. Slowly over the years the pressure for transparency in governance and accountability in administration increased to a very high
Post a Comment
Read more
More posts