Showing posts from March, 2018
Show all

- March 27, 2018
CIVIL APPELLATE JURISDICTION CIVIL APPEAL NO. 3173 OF 2018 (Arising out of S.L.P.(CIVIL) No. 5456 OF 2018) Union of India   ...Appellant Versus R. Sethumadhavan & Anr. ...Respondents J U D G M E N T  Madan B. Lokur, J . 1.Leave granted. 2.More than 140 years ago, it was said by the Privy Council:  “ These proceedings certainly illustrate what was said by Mr.Doyne , and what has been often stated before, that the difficulties of a litigant in India begin when he has obtained a Decree .” 1 A somewhat similar fate seems to await government servants – on getting retired, they have to struggle for the due pension. This is a classic case of a railway employee who retired as a Train Examiner on 31st March, 1991 1 General Manager of the Raj Durbhunga, under the Court of Wards v. Maharajah Coomar Ramaput Sing, (1871-2) Vol. XIV Moo, I.A.605 and his pension woes are being decided after 27 years and unfortunately not in his favour. 3.We recommend to the Department of Personnel and
Post a Comment
Read more 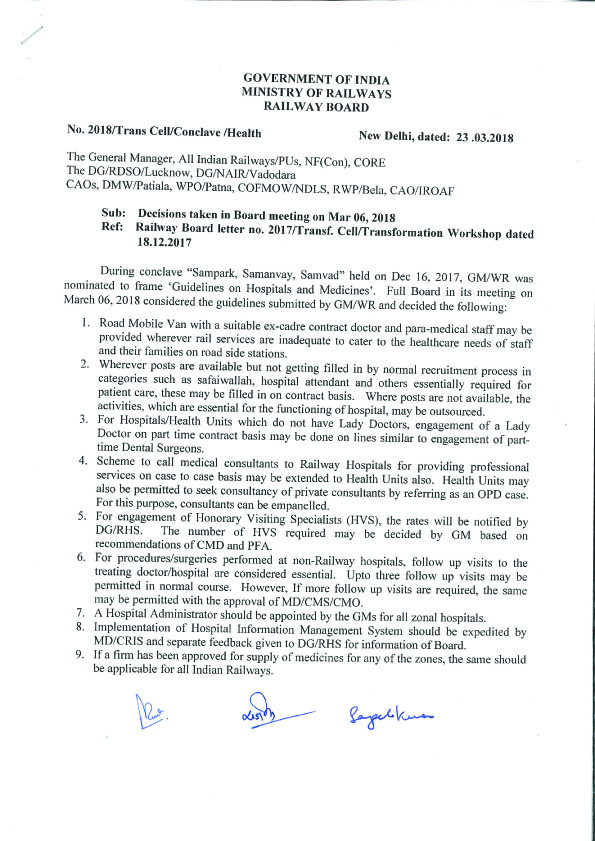 - March 25, 2018
Appointment on compassionate grounds : Second Marriage Policy Order GOVERNMENT OF INDIA MINISTRY OF RAILWAYS RAILWAY BOARD ***** RBE No. 42/2018 No. E(NG)II/2018/RC-1/5 New Delhi, dated 21.03.2018 The General Manager(P) All Indian Railways & PUs. Sub: Appointment on compassionate grounds. The issue of considering appointment on compassionate grounds(CG) to sons/daughters, born through other than first legally married wife has been engaging the attention of this Ministry for quite some time, in the backdrop of partial quashing of CG related instructions contained in this Ministry’s letter dated 02.01.1992 regarding such appointments, by the Hon’ble High Court/Calcutta in the case(WPCT 20 of 2009) Namita Goldar & Ors. Vs UOI & Others. 2. In this regard, Railway Board has taken into account following observations of the Hon’ble Supreme Court, on the subject of CG appointment, in the case of State Bank of India & another Vs Rajkumar, (Civil appeal No. 1641 of 20
Post a Comment
Read more

Special facilities provided to elderly and disabled by the Banks

- March 24, 2018
Special Facilities provided to Elderly Persons and Disabled by the Banks Ministry of Finance Special Facilities provided to Elderly Persons and Disabled by the Banks 23 MAR 2018 Reserve Bank of India (RBI) has issued directions on 09.11.2017 to banks to provide special facilities to the disabled and elderly persons. All banks have put in place the appropriate mechanism for following specific provisions to ease the Banking Services without difficulty to Senior Citizens and Differently Disabled Persons i.e. Dedicated Counters/ Preference to Senior Citizens, Differently abled persons, Ease of submitting Life Certificate, Cheque Book Facility, Automatic conversion of status of accounts, Additional Facilities to visually impaired customers, Ease to filing Form 15G/H and Banking at door step. Banks are taking effective steps to provide these facilities. Department of Financial Services (DFS), Ministry of Finance has advised all the banks on 22.12.2017 to implement the instructions of RB
Post a Comment
Read more

Pension laws in India a khichdi

- March 23, 2018
Media news: ........ Pension laws in India a khichdi: Supreme Court The Supreme Court on Thursday called pension laws of the country a “khichdi” of instructions, office memoranda, clarifications, corrigenda and so on and so forth. A Bench of Justices Madan B. Lokur and Deepak Gupta, in a judgment recommended the Department of Personnel and Training “to try and make life after retirement easier for a government servant by having appropriate legislation enacted by Parliament or applicable pension rules.”
Post a Comment
Read more

- March 23, 2018
Attention of Railway Pensioners who are getting Post retirement pass/Widow pass from Divisional office Palakkad Letter No J/P 721/Ch S&WI/Genl Corres/2018 date d 8.3.2018 addressed to NFRP from Sr.DPO/PGT Sub:-SARAL PASS- Implementation of On Line receipt of Pass application for availing PRC/Widow pass in favour of Retired Railway employees/Widows reg. SARAL PASS facilities has been introduced in the Divisional Pass Section, PGT Division for the convenience of Retired employees /Widows so that they can get their post retirement complementary Pass/widows pass sitting at home.  To avail this facility, the retired Railway employees/Widows need to be registered their email address at the Divisional pass section/PGT by submitting registration form duly filled in. After registering the email address retired employee/widows can apply pass on line by sending email to chospasspbpgt@gmail.com in the prescribed format and the pass will be send as per the request. Wide publici
Post a Comment
Read more 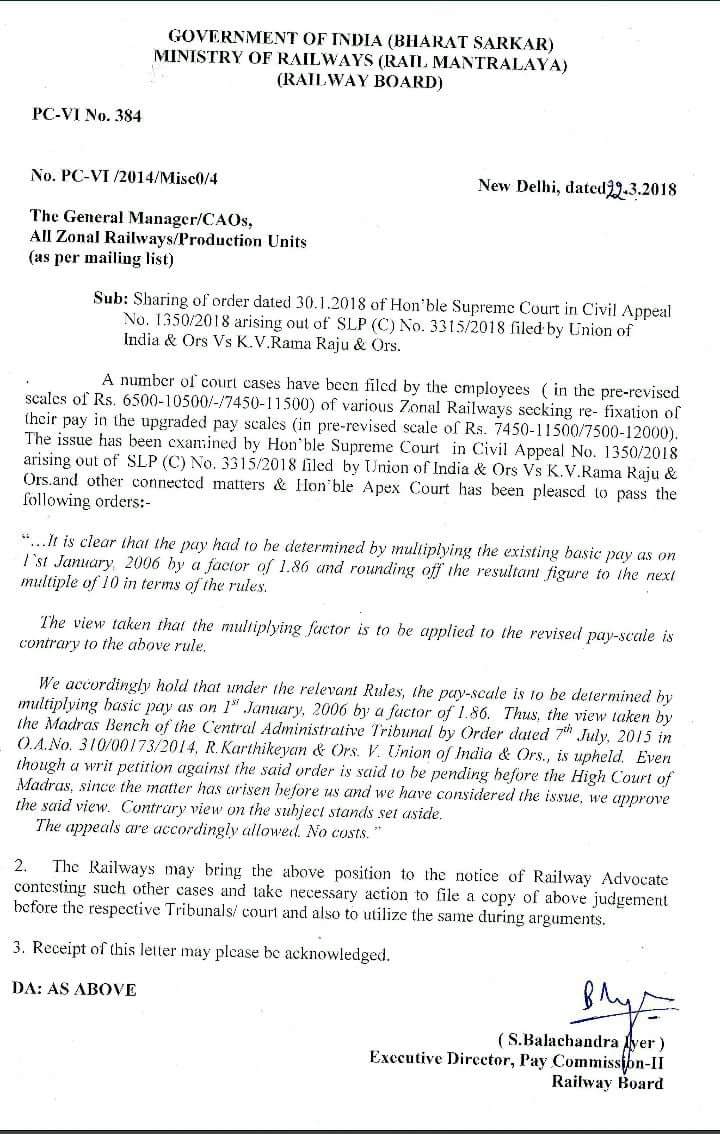 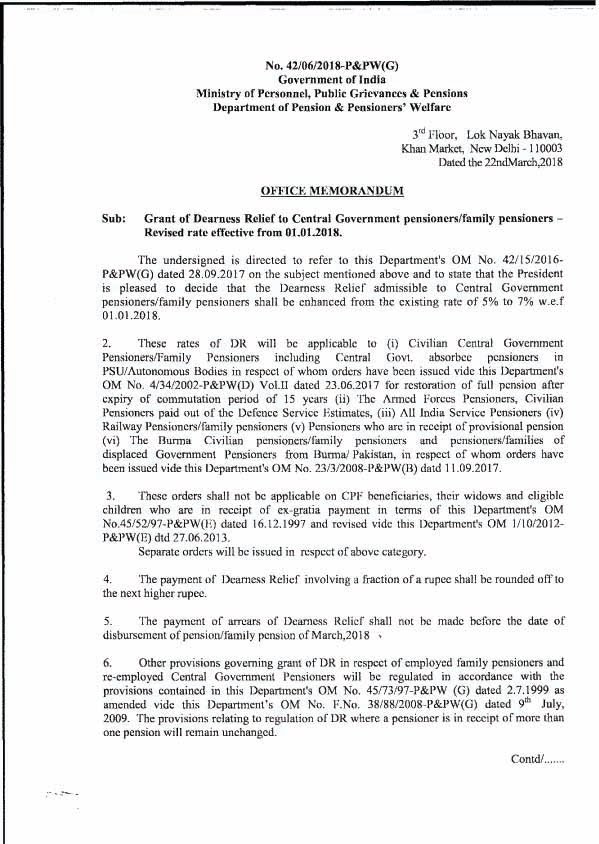 - March 22, 2018
Salary / Pension to Retired Employees Central Government civil servants appointed before 1.1.2004 are governed by the Central Civil Services (Pension) Rules, 1972. In accordance with Rule 49 of these rules, on retirement after completing a qualifying service of not less than 10 years, a Government servant is entitled to a pension calculated @ 50% per cent of his last drawn pay or 50% of the average of last 10 months’ pay, whichever is more beneficial to him, subject to a minimum of Rs. 9,000/- per month and a maximum of Rs.1,25,000/- per month. Government servant appointed on or after 1.1.2004 is governed by the National Pension System. Under this system, a Government servant is required to mandatorily contribute during service 10% of his pay and dearness allowance to his pension account and an equal amount of 10% of pay and dearness allowance is contributed by the Government to the employee’s pension account. On retirement on superannuation, the retiring Government employee is mand
Post a Comment
Read more 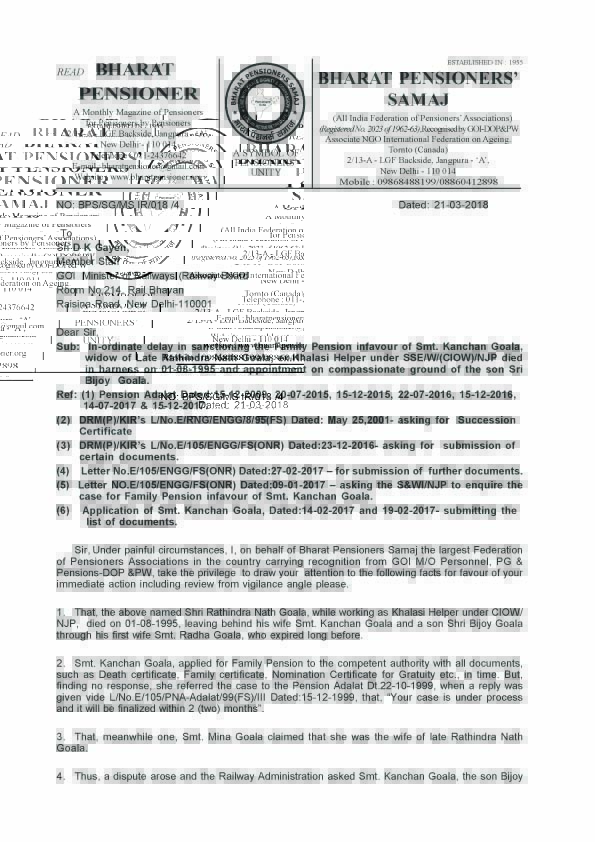 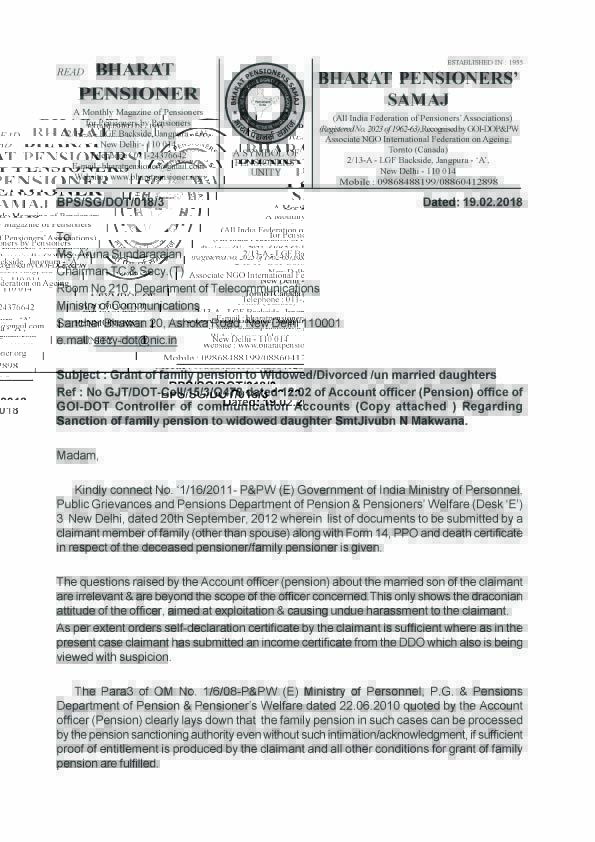 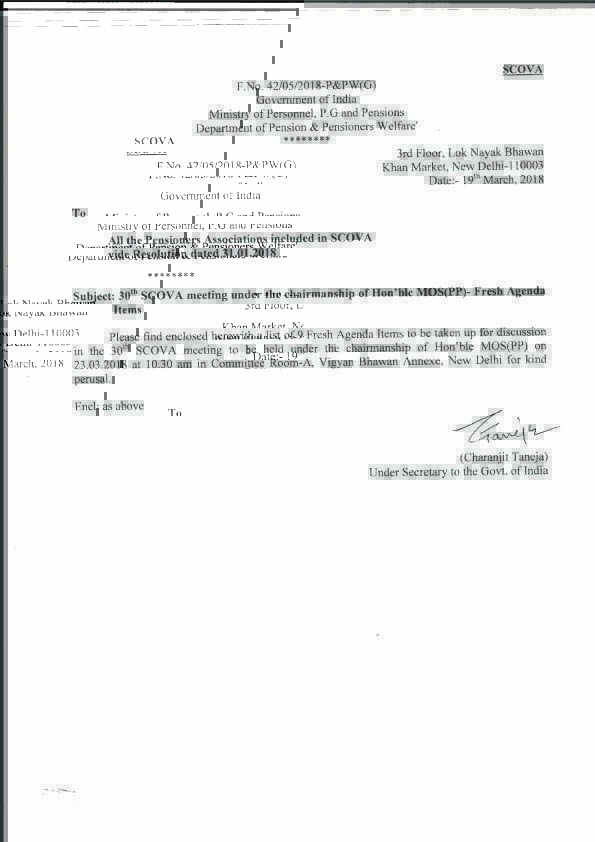 Exemption of Railway Employees appointed on or after 01.01.2004 from the purview of National Pension System (NPS) is not feasible - FM 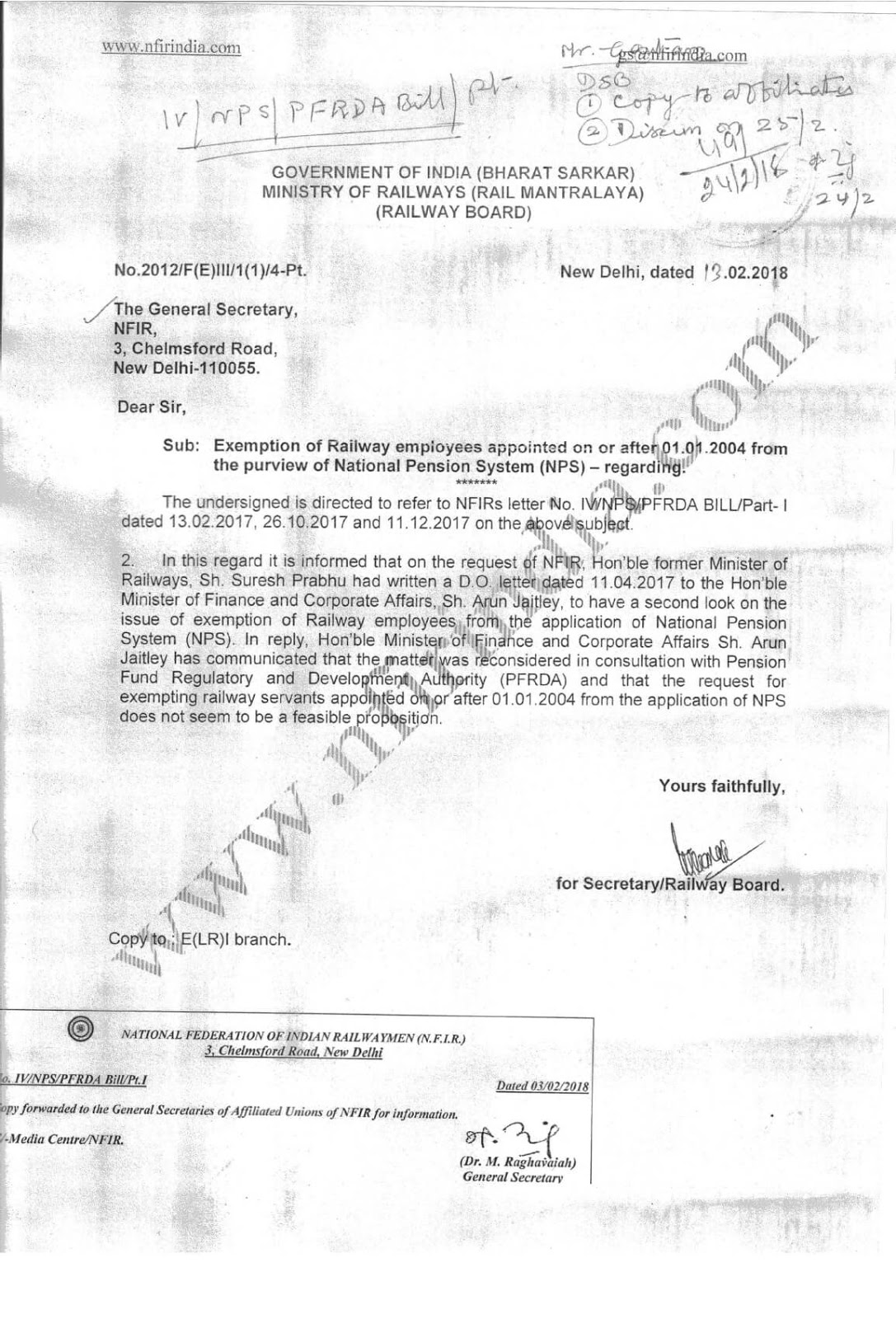 Government of India (BHARAT SARKAR)  Ministry of Railways (RAIL MANTRALAYA)  (RAILWAY BOARD) No.2012/F(E)III/1(1)/4-Pt  New Delhi, Dated : 13.02.2018 The General Secretary, NFIR, 3, Chelmsford Road, New Delhi – 110055. Sub : Exemption of Railway employees appointed on or after 01.01.2004 from the purview of National Pension System (NPS) – regarding. The undersigned is directed to refer to NFIRs letter No. IV/NPS/PFRDA BILL/Part- I dated 13.02.2017, 26.10.2017 and 11.12.2017 on the above subject. 2. In this regard it is informed that on the request of NFIR, Hon’ble former Minister of Railways, Sh.Suresh Prabhu had written a D.O letter dated 11.04.2017 to the Hon’ble Minister of Finance and Corporate Affairs, Sh.Arun Jaitley, to have a second look on the issue of exemption of Railway employees from the application of National Pension System (NPS). In reply, Hon’ble Minister of Finance and Corporate Affairs Sh. Arun Jaitley has communicated that the matter wa
Post a Comment
Read more

Minimum educational qualification for recruitment from open market in Level -1 of the pay matrix of 7th CPC in CEN No.02/2018 issued by RRB (RBE No. 31/2018) 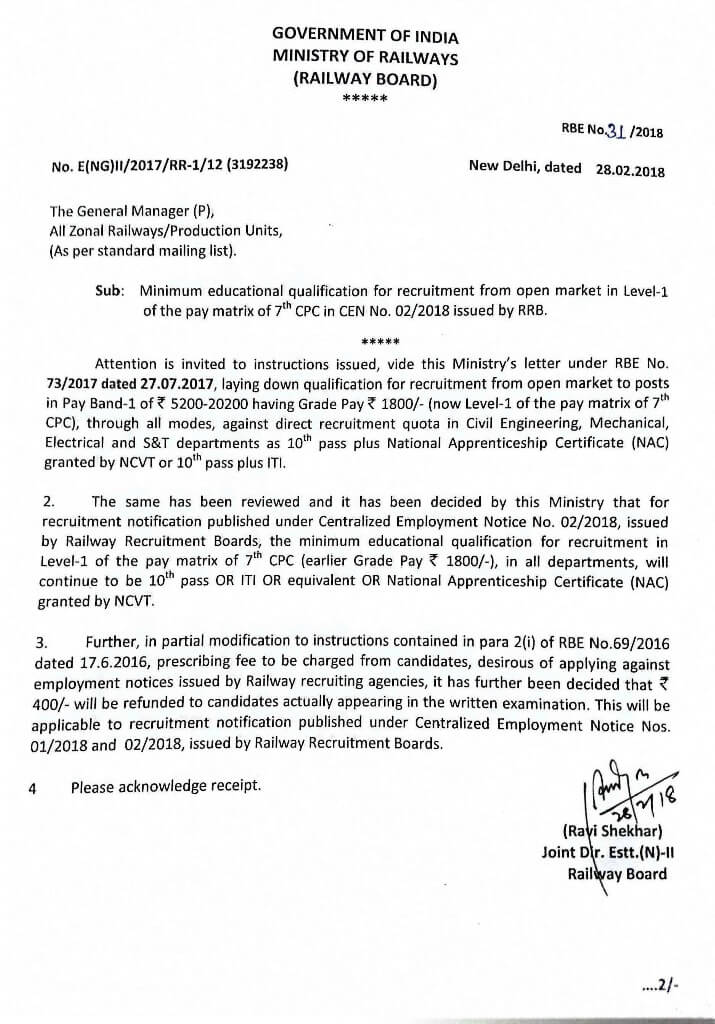 GOVERNMENT OF INDIA  MINISTRY OF RAILWAYS  (RAILWAY BOARD) RBE No.31/2018 No.E(NG)II/2017/RR-1/12(3192238)  New Delhi, dated : 28.02.2018 Sub : Minimum educational qualification for recruitment from open market in Level -1 of the pay matrix of 7th CPC in CEN No.02/2018 issued by RRB. Attention is invited to instructions issued, vide this Ministry’s letter under RBE No 73/2017 dated 27.07.2017, laying down qualification for recruitment from open market to posts in Pay Band-1 of Rs. 5200-20200 having Grade Pay Rs.1800/- (now Level-1 of the pay matrix of 7th CPC), through all modes, against direct recruitment quota in Civil Engineering, Mechanical, Electrical and S&T departments as 10th pass plus National Apprenticeship Certificate (NAC) granted by NCVT or 10th pass plus ITI.  2. The same has been reviewed and it has been decided by this Ministry that for recruitment notification published under Centralized Employment Notice No. 02/2018, issued by Rai
Post a Comment
Read more 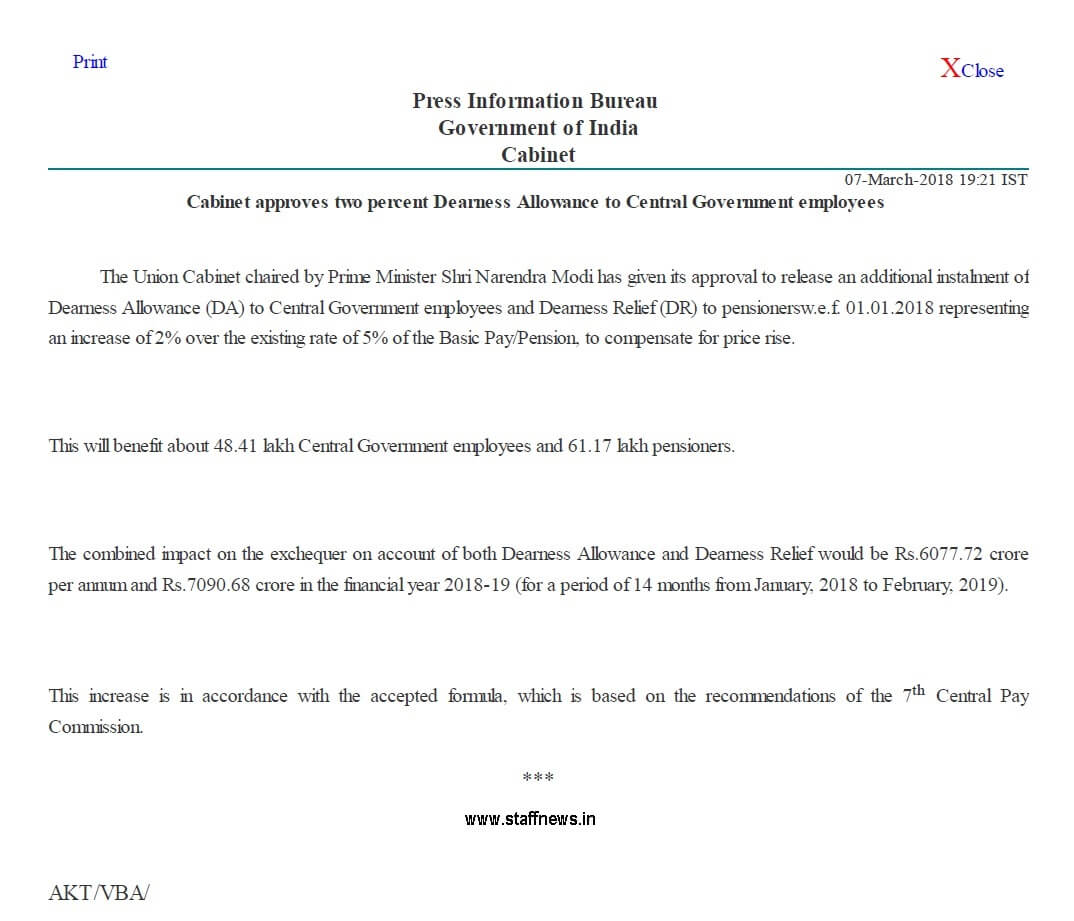 Press Information Bureau  Government of India Cabinet 07-March-2018 19:21 IST Cabinet approves two percent Dearness Allowance to Central Government employees The Union Cabinet chaired by Prime Minister Shri Narendra Modi has given its approval to release an additional instalment of Dearness Allowance (DA) to Central Government employees and Dearness Relief (DR) to pensioners w.e.f. 01.01.2018 representing an increase of 2% over the existing rate of 5% of the Basic Pay/Pension, to compensate for price rise. This will benefit about 48.41 lakh Central Government employees and 61.17 lakh pensioners. The combined impact on the exchequer on account of both Dearness Allowance and Dearness Relief would be Rs.6077.72 crore per annum and Rs.7090.68 crore in the financial year 2018-19 (for a period of 14 months from January, 2018 to February, 2019). This increase is in accordance with the accepted formula, which is based on the recommendations of the 7th Ce
Post a Comment
Read more

- March 15, 2018
F .No. 42/14/2017-P&PW(G)  Government of India  Ministry of Personnel, PG and Pensions  Department of Pension & Pensioners Welfare' 3rd Floor, Lok Nayak Bhawan  Khan Market, New Delhi-110008  Date:- 08th March, 2018 OFFICE MEMORANDUM Sub:- Amendment of instructions regarding dearness relief to re-employed pensioners consequent on revision of ignorable part of pension for fixation of pay in the re- employment post-reg The undersigned is directed to refer to subject cited above and to say that the grant of dearness relief to re-employed pensioners/family pensioners is presently regulated in accordance with the instructions contained in this Department's OM No. 45/73/97-P&PW(G) dated 02.07.1999 and subsequently amended vide this Department's dated 38/88/2008- P&PW(G) dated 09.07.2009  2. DoPT, vide their OM No.3/3/2016-Estt.(Pay 11) dated 01.05.2017 have issued instructions for revision of ignorable amount of pension from Rs. 4000/- to
Post a Comment
Read more

Delinking of qualifying service of 33 years for revised pension : PCDA (Pension) Circular No. 597