Showing posts from September, 2014
Show all

Message from Director, CGHS regarding Medicines

Message from Director, CGHS regarding Medicines

Competent Medical OfficerlBoard for issuing certificate of disability for the . purpose of family pension under rule 54 of CCS (pension) Rules, 1972 - 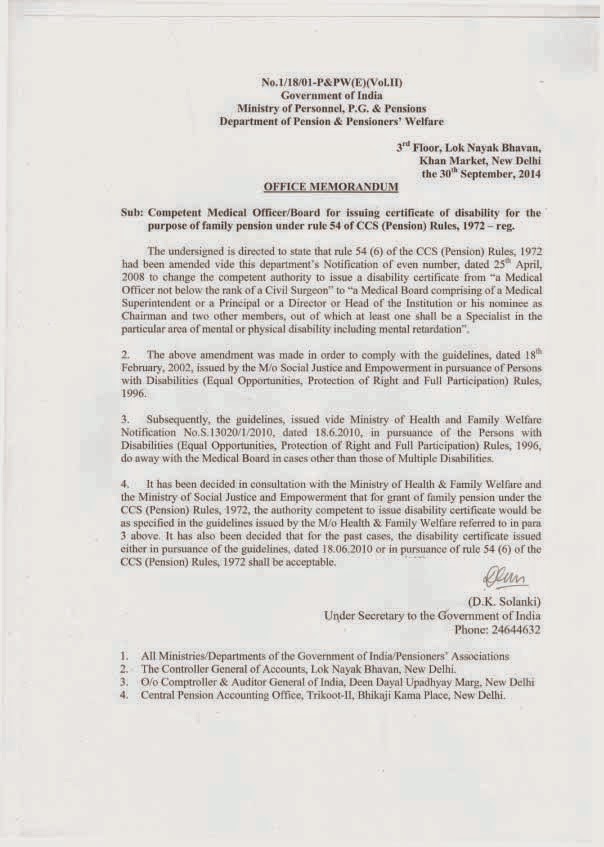 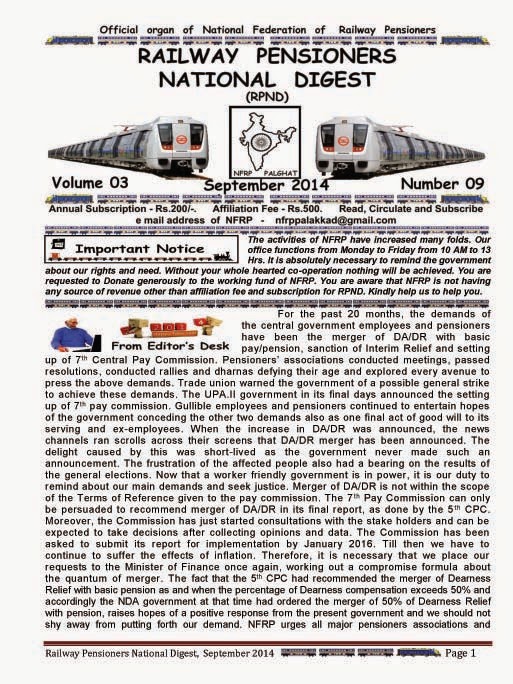 GOVERNMENT IS TOTALLY NEGATIVE-Each Demand the reply is NO, NO, NO, NO………………

- September 30, 2014
No DA Merger, No Interim Relief, No relaxation of Compassionate Appointment condition, No withdrawal of New Pension Scheme, , No Assurance Regarding 01.01.2014 Date of Effect of 7th CPC,  For Each Demand the reply is NO, NO, NO, NO………………
Post a Comment
Read more 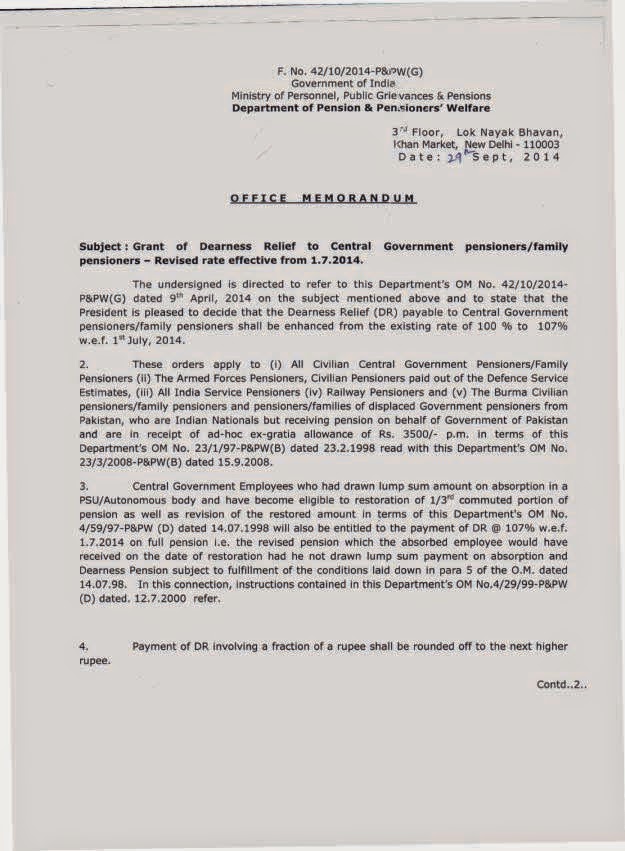 NEW DELHI: Bharat Pensioners' Samaj (BPS), the largest and oldest organization of pensioners in India on Saturday came out to help the victims of floods in Jammu an& Kashmir with  MONEY and relief material.  A BPS delegation met Dr Jitendra Singh, minister of state in PMO, and handed over a cheque as donation to the Prime Minister's National Relief  FUND  (PMNRF). It has also dispatched two trucks full of relief material including ration and clothes to Jammu and Kashmir.  Acknowledging the contribution made by BPS, Singh said that while the  MONEY  and material contributed by them were going to be of immense help in carrying out the relief work, the gesture of these elder retired officials was of far greater importance. "It is like a blessing for all of us who are engaged in pulling Jammu & Kashmir out of this ordeal," Singh said.  Expressing solidarity with the people of Jammu and Kashmir in their hour of distress, Secretary General of BPS, SC Maheshwar
Post a Comment
Read more

- September 20, 2014
Bharat Pensioners’ Samaj donates to Prime Minister’s National Relief Fund A delegation of “Bharat Pensioners’ Samaj” (BPS), the largest and oldest organization of Pensioners in India met Dr Jitendra Singh, Union Minister of State (Independent Charge) for Science & Technology and Earth Sciences, Minister of State in Prime Minister's Office (PMO), Personnel, Public Grievances and Pensions, Space and Atomic Energy, here today. The delegation handed over a cheque as donation to the Prime Minister’s National Relief Fund (PMNRF) in the aid of flood victims of Jammu & Kashmir and also dispatched two trucks full of relief material including ration and clothes to Jammu & Kashmir. Acknowledging the contribution made by the Pensioners’ Association, Dr. Jitendra Singh said that even though the money and material contributed by them were going to be of immense help in carrying out the relief work, but more than that, it is the symbolic gesture of these elder retired officials, wh
Post a Comment
Read more 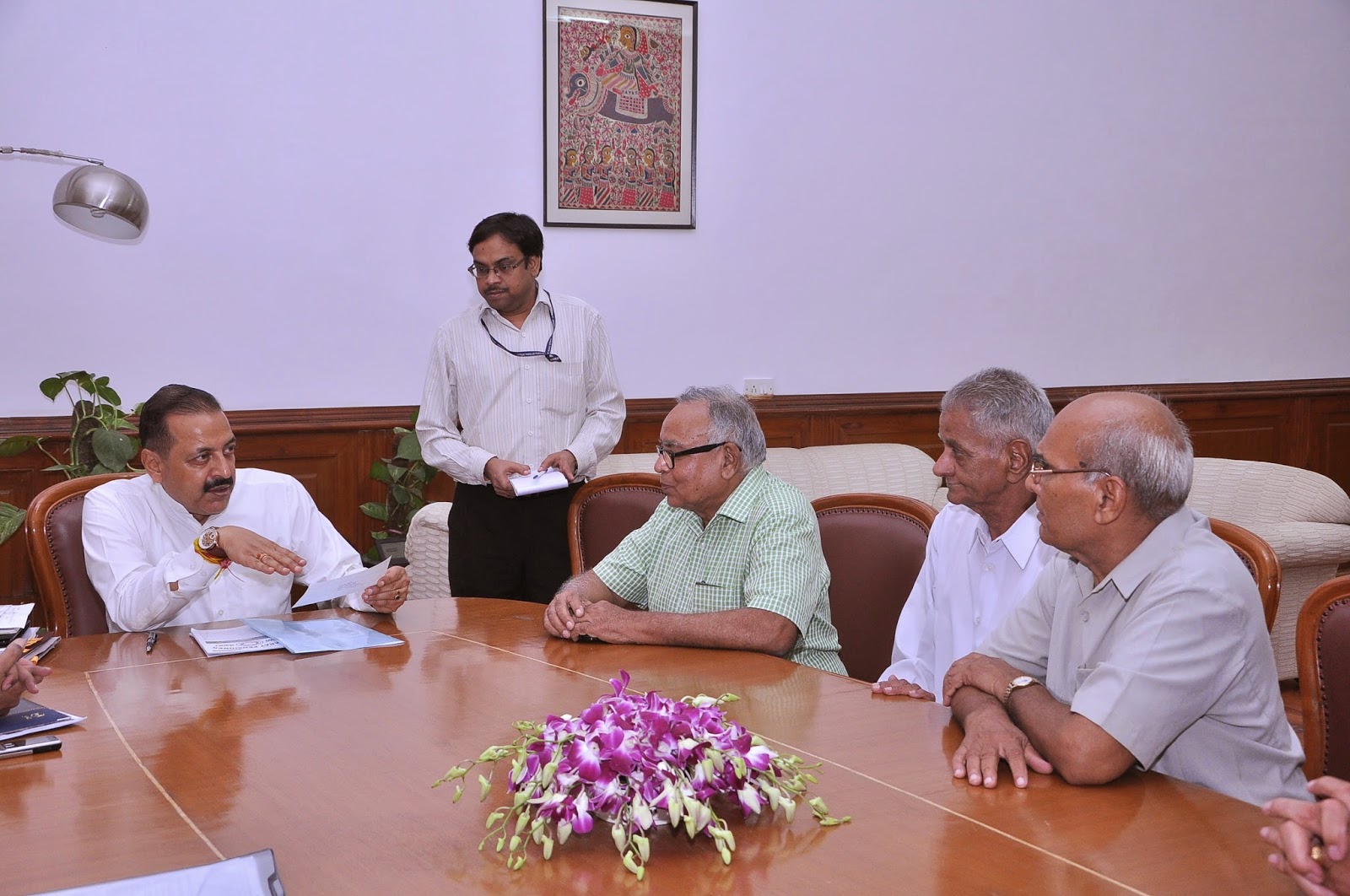 SCM Secy.Genl BPS discussed pensioners issues with MOS(PP) in the presence of Secy & JS (p).Also presented a Cheque of Rs 1lac to PMNRF on 20.9.2014.Honorable MOS agreed that persons in chair forget that they too will retire one day. S.C.Maheshwari in discussion with Dr Jitinder Singh Honorable MOS (PP)
Post a Comment
Read more

- September 17, 2014
KOCHI: Their demand for ‘One Rank One Pension’ started in 1983. Even after 30 years, the plea of ex-servicemen, the first to  raise  such a demand, is falling on deaf ears, when  the judges , MPs, MLAs, bureaucrats and many others receive  pensions  based on their rank. The former UPA Government has thrice earmarked fund in its budget for ‘One Rank One Pension’ scheme. But the ex-servicemen, who once served the country, are yet to get their due. Left with no other alternative, ex-servicemen across the country have decided to go for hunger strike on Wednesday. “After the sixth Pay Commission in 2006, the Army personnel who  retired  a day before it and after it with the same rank get a pension with wide gap. Those who  retire early  gets a considerably lower pension than those who retire recently. It has been 30 years, since we had requested them to bridge the gap,” said  Pratapan, secretary,  National Ex-servicemen Co-ordination Committee, Ernakulam. Many committees con
Post a Comment
Read more

- September 15, 2014
GOVERNMENT OF INDIA MINISTRY OF RAILWAYS LOK SABHA UNSTARRED QUESTION NO 5308 ANSWERED ON 14.08.2014 REDUCED RAILWAY QUOTAS 5308 . Karandlaje Km. Shobha Will the Minister of  RAILWAYS  be pleased to state:- (a) whether Railways have reduced Defence/ Tatkal/ Female (above 45 years)/  Senior Citizen  Quotas in trains; (b) if so,  the details  thereof, zone-wise, train-wise, class-wise including trains going from New Delhi/H. Nizamuddin  Railway Stations  to Karnataka State viz. Bangalore, Hubli and Kankanadi (Mangalore) along with the reasons for the same; (c) whether the Railways propose to restore the earlier quotas including trains going to Karnataka; (d) if so, the time frame for its restoration; and (e) if not, the reasons therefor? ANSWER MINISTER OF STATE IN THE  MINISTRY OF   RAILWAYS  (SHRI MANOJ SINHA)  (a): There has been no reduction in total number of berths/seats earmarked on Indian Railways under Tatkal, Ladies and  Senior Citizens  qu
Post a Comment
Read more

Minutes of the Advisory Committee for Web-based Pensioner's Portal 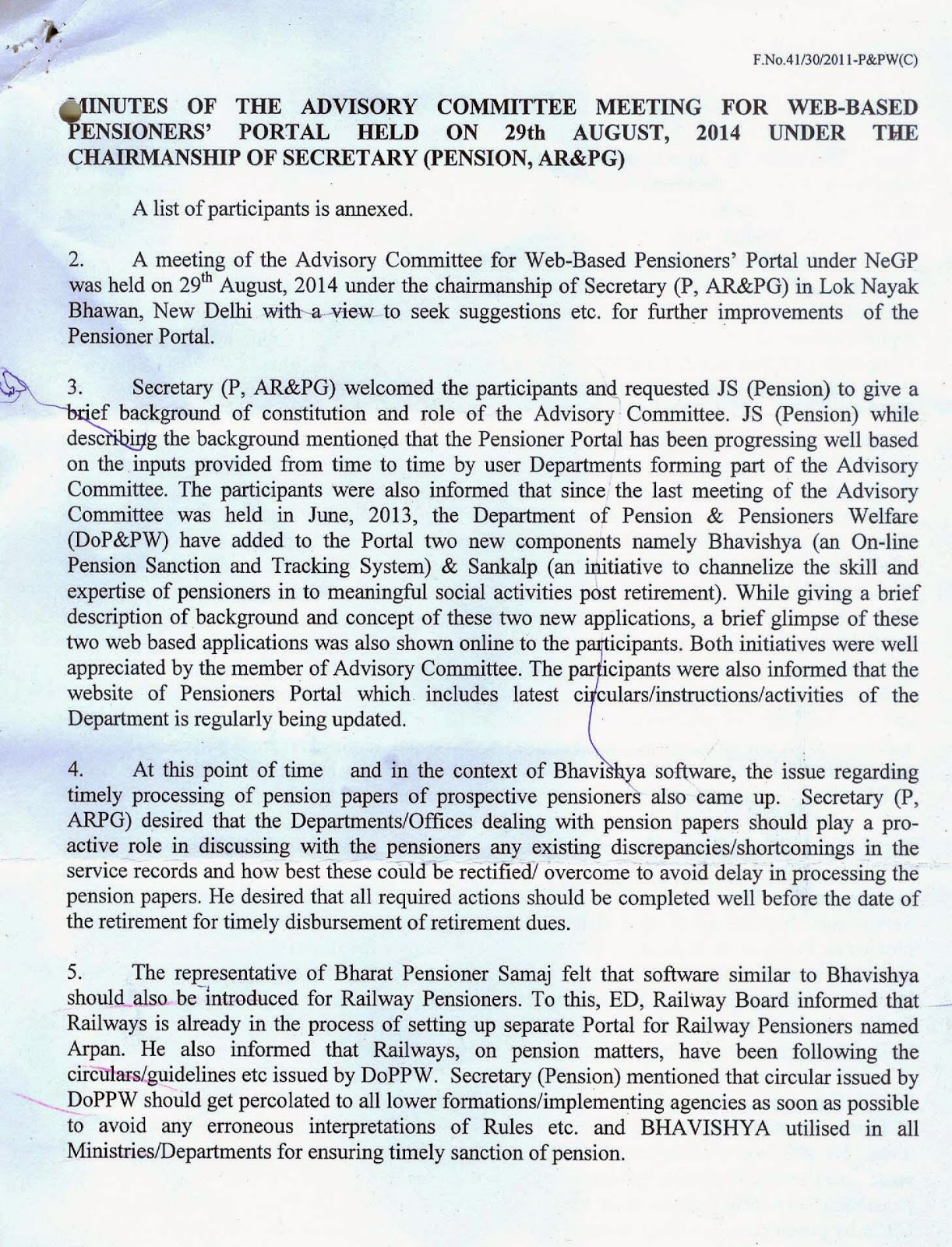 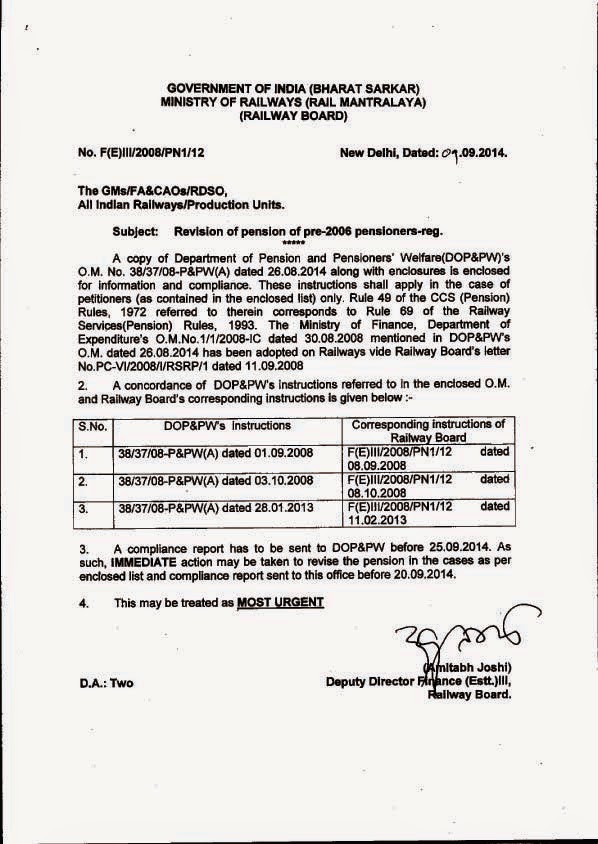 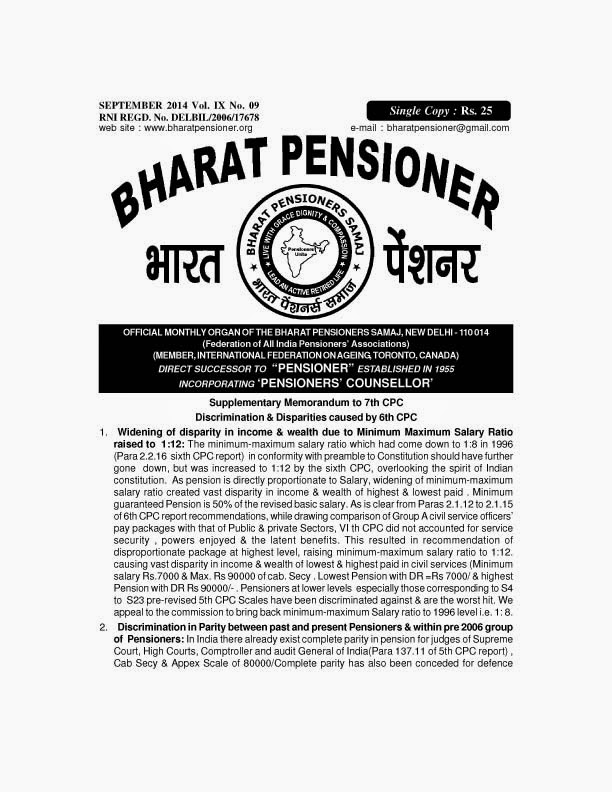 - September 08, 2014
FLASH NATURE’s anguish & devastation in JAMMU & KASHMIR Donate generously to   BPS  BENEVOLENT  FUND  to help our  JAMMU & KASHMIRI  BROTHERS, SISTERS, DAUGHTERS &  SONS BPS propose to Donate Rs one Lac through Prime Minister’s relief fund for the relief of flood hit citizens of Jammu & Kashmir. I am sure as usual BPS Affiliates, members, supporters & well wishers will rise to the occasion  and will express solidarity through monetary donations for the relief of citizens in trouble. Donations may be deposited in Bharat Pensioners Samaj SBI bank SB A/C No10825178380 IFSC code SBIN 0001274 Jangpura N. Delhi Branch under advise to Treasurer BPS 2/13A LGF (Backside) Jangpura A or through EMOs /Cross cheques/Drafts in the name of BHARAT PENSIONERS SAMAJ on the address given. S.C.Maheshwari Secretary Genl. BPS ​e.mail bharatpensioner@gmail.com​
Post a Comment
Read more
More posts