Showing posts from January, 2017
Show all

- January 30, 2017
No.3/3/2016-P&PW(F) Ministry of Personnel, PG & Pensions Department of Pension & Pensioners’ Welfare Desk-F 3rd Floor, Lok Nayak Bhavan, Khan Market, New Delhi-110003 Dated 16th January 2017. OFFICE MEMORANDUM Subject:  Clarification regarding timely payment of GPF final payment to the retiring Government servant – regarding During review meetings held to evaluate the status of implementation of Bhavishya with Ministries/Departments, it was observed that GPF final payment in many cases is not being paid to the retiring Government servants immediately on retirement from service leading to payment of interest for the delayed period. 2. Rule 34 of General Provident Fund (Central Service) Rules clearly provides that when the amount standing at the credit of a subscriber in the General Provident Fund becomes payable, it shall be the duty of the Accounts Officer to make payment. The authority for the amount payable is to be issued at least a month before the date of s
Post a Comment
Read more

Revision of Pension of Pre 2006 Pensioners – Reg. Benefit of Up-gradation of Pay Scales Upgraded / Merged as per recommendations of the 6th CPC. 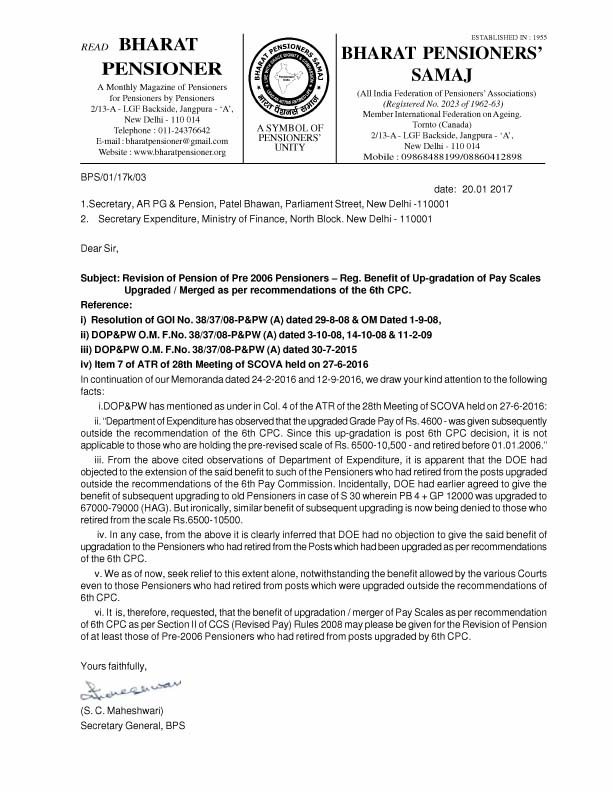 - January 24, 2017
NJCA National Joint Council of Action 4, State Entry Road New Delhi – 110055 No.NJCA/2017 Dated: January 19, 2017 All the Constituents of National Council(JCM) Dear Comrades, Sub: Brief of the meeting held today with the Cabinet Secretary A meeting was held today with the Cabinet Secretary, Government of India, wherein myself as well as Com M.Raghavaiah were present. We explained him about various Issues of the Central Government Employees pending at the government level The main issues were NPS, Minimum Wage and Fitment Formula, Allowances, Pension and Very Good Benchmark, etc. etc. The Cabinet Secretary informed us that, Pension issues have already been referred to the Cabinet, and the report of the Committee on Allowances is likely to be submitted in the next month. So far as issue of NPS is concerned, he has already directed the committee to hold a meeting with the Staff Side, which has already been fixed for 20th January 2017, The issue of Mini
Post a Comment
Read more

Most of the Pre 2016 pensioners will suffer heavy loss in Revised Pension, if the Option 1 recommended by the Seventh CPC is denied to them. It was after 20 years that 7th CPC recommended parity between past pensioners and those retiring after 1-1-2016 under Option 1 which means consideration of increments earned while in service as detailed in Para 10.1.67 of the Report. This objective of PARITY (Recommended by Commission after examining all factors in depth in Chapter 10) is fulfilled only with the implementation of option 1 without any dilution/deviation. Non implementation of option 1 on the plea of non availability of record in a few cases will have the following adverse effects: i) Pre 2006 pensioners, in particular, who are victim of modified parity will suffer a much bigger loss compared to the post 2006 retirees because in their case the basic pension which is multiplied by 2.57 in the interim phase takes into accounts their increments before retirement. This aspect has been
Post a Comment
Read more 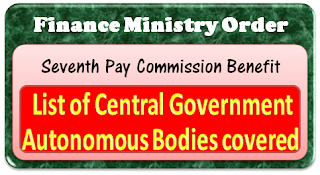 After a long wait Govt has issued orders for implementation of 7th Pay Commission Pay revision in the form of guidelines to the Autonomous Bodies. The recommendations of the 7th Central Pay Commission, to the employees of the Quasi-government Organizations, Autonomous Organizations, Statutory Bodies, etc., Set up and funded/controlled by the Central Government, where pattern of emolument structure, i.e. pay scales and allowances, in particular Dearness Allowance, House Rent Allowance and Transport Allowance, are identical to those in case of the Central Government employees, has been considered by the Government and it has been decided that the revised pay scales as per the Pay Matrix, as contained in Part-A of the Schedule of the CCS(RP) Rules, 2016 as well as the principle of pay fixation as contained in the said rules, may be extended to the employees of such organizations.  As per the orders issued by Finance Ministry on 13.01.2017, While Part A of 7th Pay Commission (
Post a Comment
Read more

Extension of scope of grant of Dearness Relief to Central Government pensioners who are in receipt of provisional pension or pension in the pre-revised scale of 5th CPC w.e.f. 01/07/2012.