Showing posts from 2013
Show all

- December 31, 2013
Wish that the coming year is a glorious one that rewards all your future endeavors with success. Happy New Year 2014  S.C.Maheshwari
Post a Comment
Read more

- December 29, 2013
Press Information Bureau  Government of India Ministry of Communications & Information Technology  26-December-2013 13:27 IST Disbursement of pensionary benefits to all the combined service pension optee absorbed employees of Mahanagar Telephone Nigam Limited (MTNL)  The Union Cabinet today approved the erstwhile all categories (Group A, B, C & D) of employees of the government absorbed in MTNL and who have opted for combined service may be given similar treatment in the matter of payment of pensionary benefits as available to the absorbed employees of BSNL. Accordingly, consequential amendments to the Central Civil Services (Pension) Rules, adjustments in respect of Government pension liability previously discharged by MTNL and proposed change in methodology in pension contribution as per FR-116 upto 31.12.2005 on the maximum of the IDA pay-scales and with effect from 01.01.2006 on the actual pay drawn in the IDA pay-scales will be made.  Based on th
Post a Comment
Read more

Grant of full sets of post retirement Rly. passes after 20years of Service 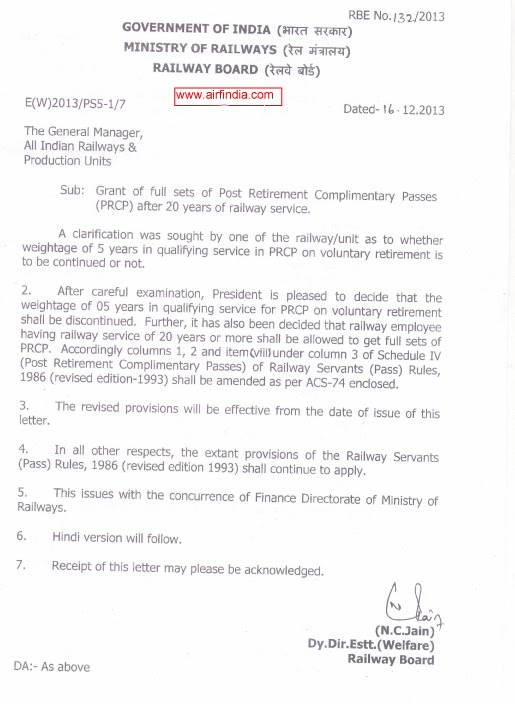 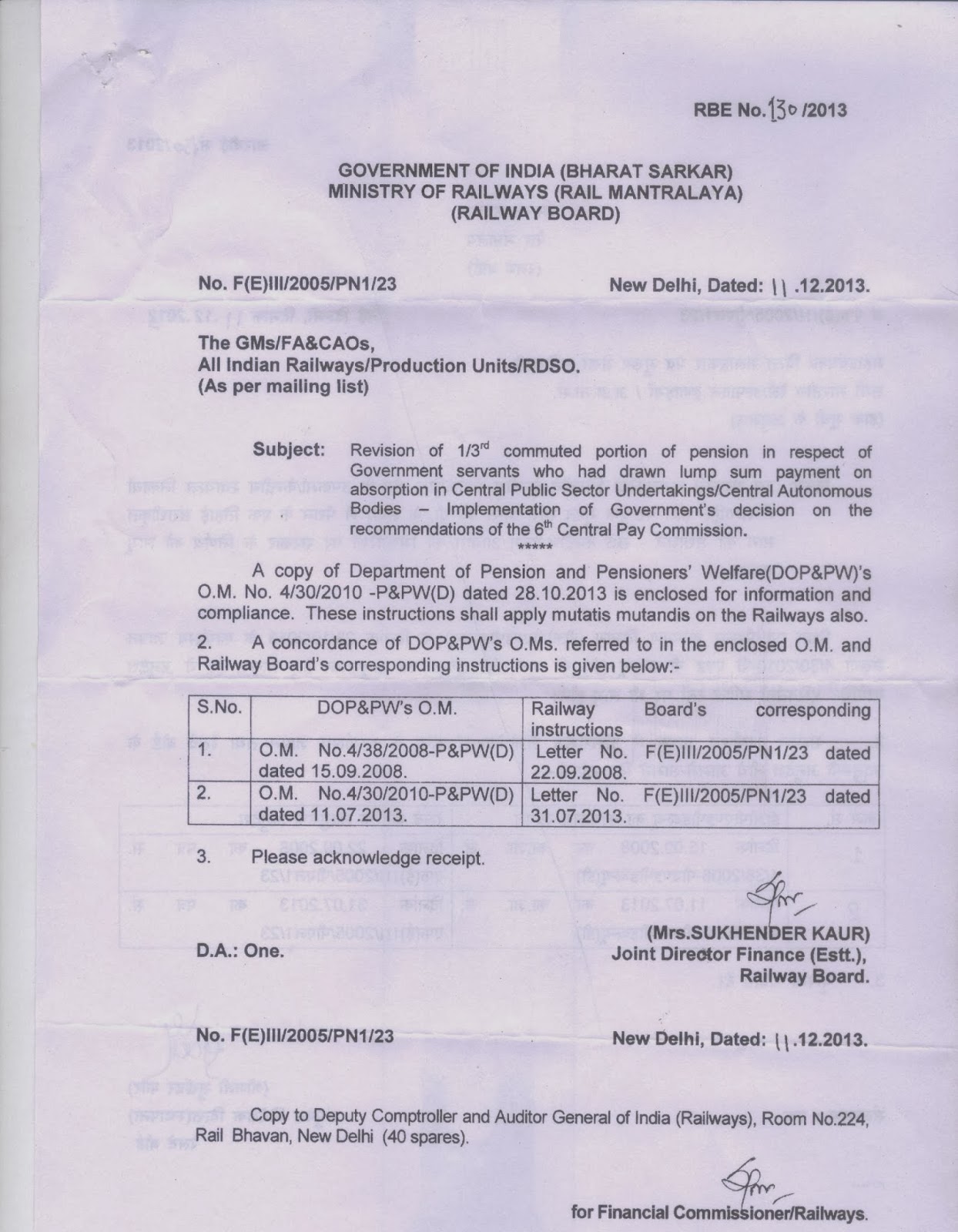 - December 16, 2013
D.S.Nakara  8.4.1914 - 29.72009 Every year we celebrate Pensioners day to pay homage to the great soul of D.S.Nakara who tirelessly fought a legal battle for the self respect & dignity of entire the community of Pensioners, he relentlessly pleaded in the apex court  which resulted  in  the Land mark   judgement on 17.12.1982 in Writ petitions numbers 5939-41 of 1980. Wherein the apex court clarified all the issues connected with pension. The Honorable Supreme court ruled,"A pension scheme consistent with available resources must provide that the Pensioner would be able to live : (I)                 free from  want, with decency, independence and self respect and (II)              at a standard equivalent at pre retirement level (III)           Pensioners form a class, their computation their computation of Pension can not be by different formula affording unequal treatment solely on the ground that some retired earlier and some retired later (IV)           “T
Post a Comment
Read more 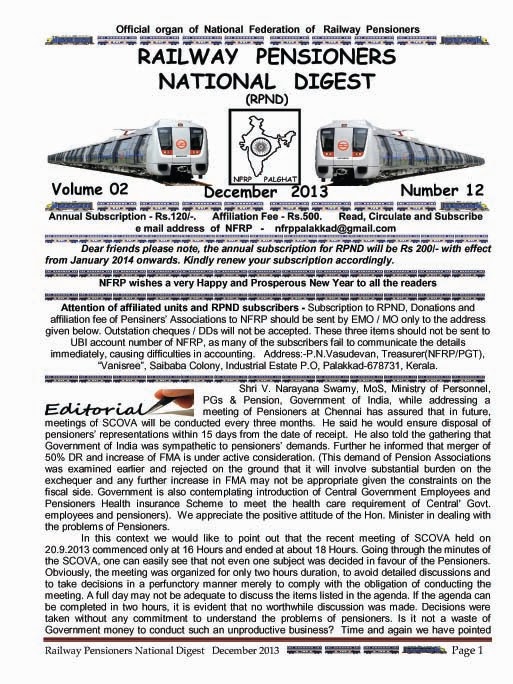 - December 16, 2013
Posted:   15 Dec 2013 05:31 PM PST Enhancement of salary limit of Employees Provident Fund Enhancement of salary limit of Employees Provident Fund is considering to Rs.15000..! While answering to a question in Parliament, Minister of State for Labour and Employment Shri Kodikunnil Suresh said that A proposal for enhancing the wage ceiling from Rs. 6500/- to Rs. 15000/- and reducing the threshold limit from 20 to 10 under the Employees Provident Funds & Miscellaneous Provisions Act, 1952 are under consideration of the Government. A proposal for providing a minimum pension of Rs. 1000/- to member pensioners under Employees’ Pension Scheme, 1995 is also under consideration of the Government.
Post a Comment
Read more

Criteria for Setting up of CGHS Dispensary

Beacon Light of Pensioners movement and Centenarian Sri V.S. Devasundaram passed away in the early morning of 10th December 2013. He was 104

- December 12, 2013
PENSIONERS’ MESSIAH DEVASUNDARAM IS NO MORE Beacon Light of Pensioners movement and Centenarian Sri V.S. Devasundaram passed away in the early morning of 10 th December 2013. He was 104 and survived by 4 sons, 4 da The ughters and a horde of 60+ grand and great-grand children. He was founder Organizing Secretary of the All India Federation of Pensioners’ Association which initially functioned from his residence. He was also one of the visionaries who felt the need for an exclusive journal on pensioners needs and services and helped in bringing out the handy journal “Pensioners” Advocate”. He then rose to be it President too. His untiring efforts and bargaining tactics fetched us the entitlement of Dearness Relief. Commencing his service as a staunch Trade Union leader working with doyens like T.V. Anandan,  V.V. Giri, S. Guruswamy,  K. Anandan Nambiar, M. Kalyanasundaram, and other veterans, he dedicated his entire service to the cause of Railway employees and after retirem
Post a Comment
Read more 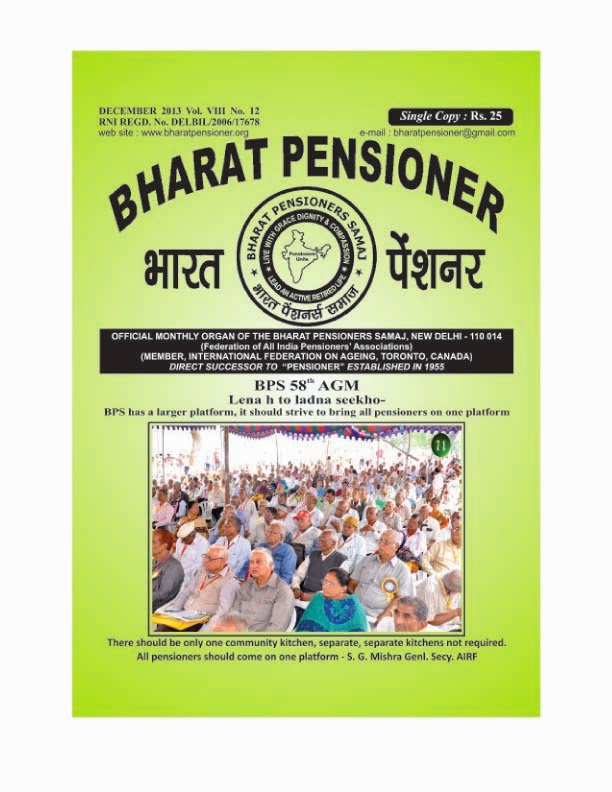 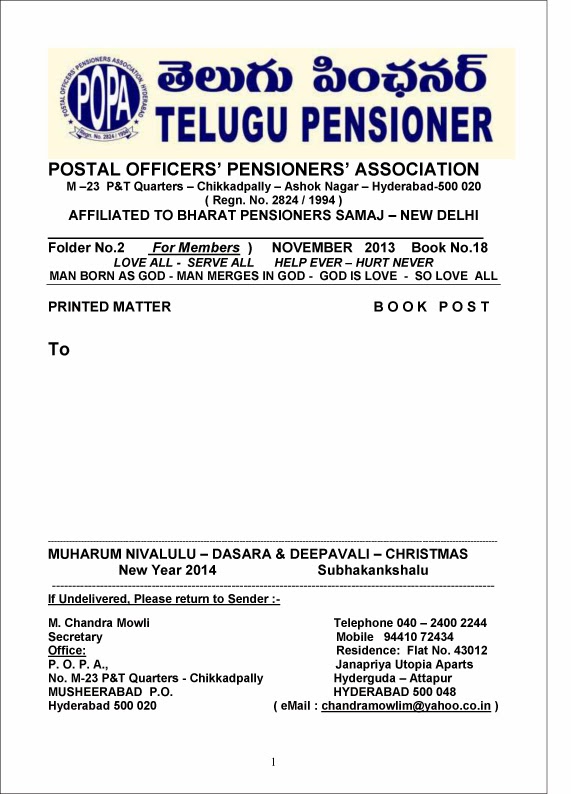