Showing posts from July, 2017
Show all

EPS to be revamped, medical scheme for pensioners to be formulatedLabour minister Bandaru Dattatreya said the government is going to formulate a medical benefit scheme for all the pensioners who are members of the employees’ provident fund PTI

EPS scheme to be revamped; medical scheme for pensioners to be formulated: Government

- July 29, 2017
NEW DELHI: The government will constitute a high-level committee to revamp the Employees Pension Scheme (EPS) and any gaps would be plugged, Labour and Employment Minister Bandaru Dattatreya told the Lok Sabha today.  He also informed the House that in association with Employees' State Insurance Corporation (ESIC), the government is going to formulate a medical benefit scheme for all the pensioners who are members of the Employees' Provident Fund (EPF). This will be a co .. Read more at: http://economictimes.indiatimes.com/articleshow/59812085.cms?utm_source=contentofinterest&utm_medium=text&utm_campaign=cppst
Post a Comment
Read more 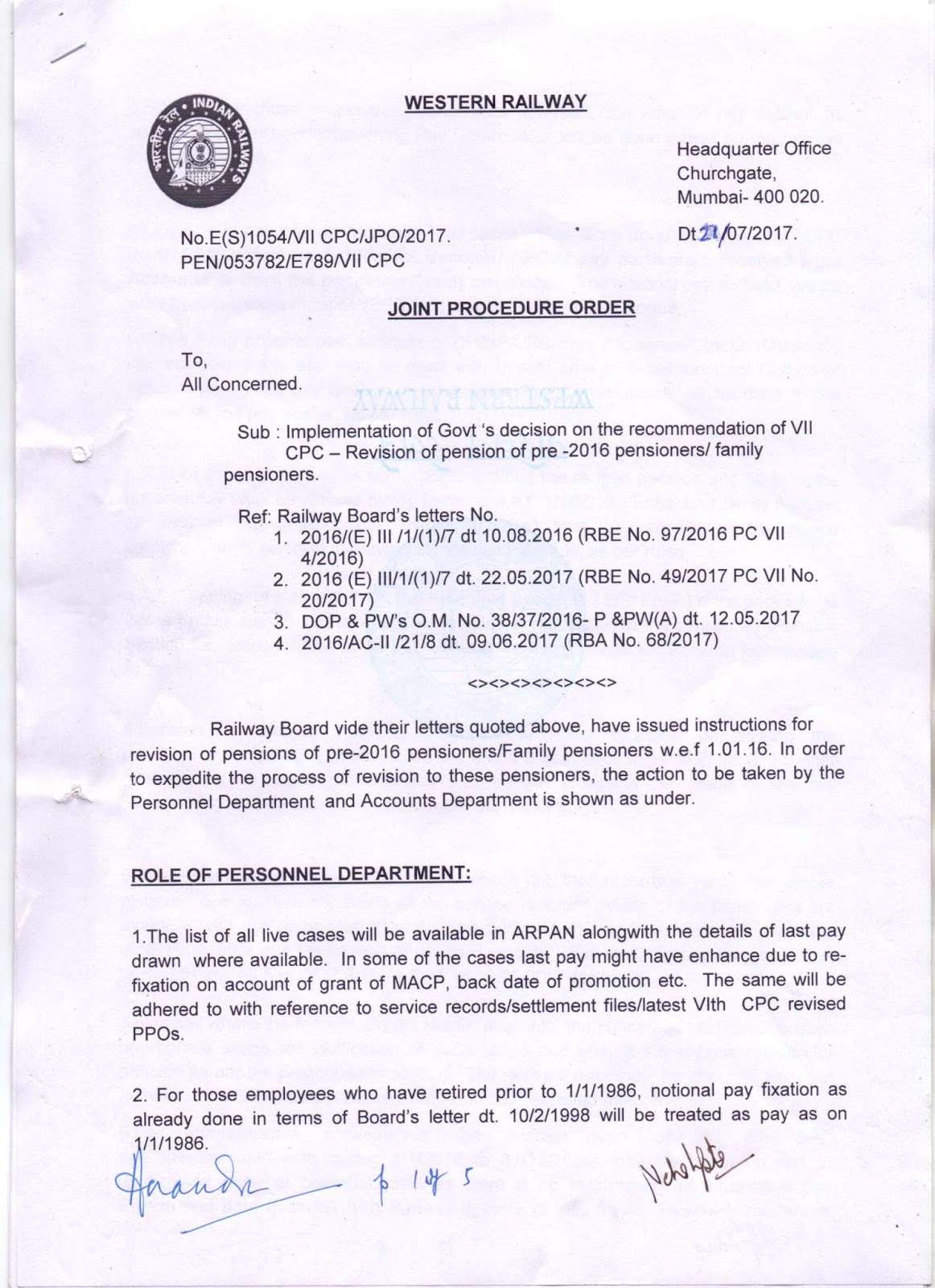 Rly took over 2 months to lay down following procedure for the revision of pension of pre 2016 pensioners on Notional pay basis which will work in descending order.It will take decades 2 revise old Pensioners pension.Many may not survive to avil th benefit. Will the Honourable Pime Minister & the Minister for Railways.Help?
Post a Comment
Read more 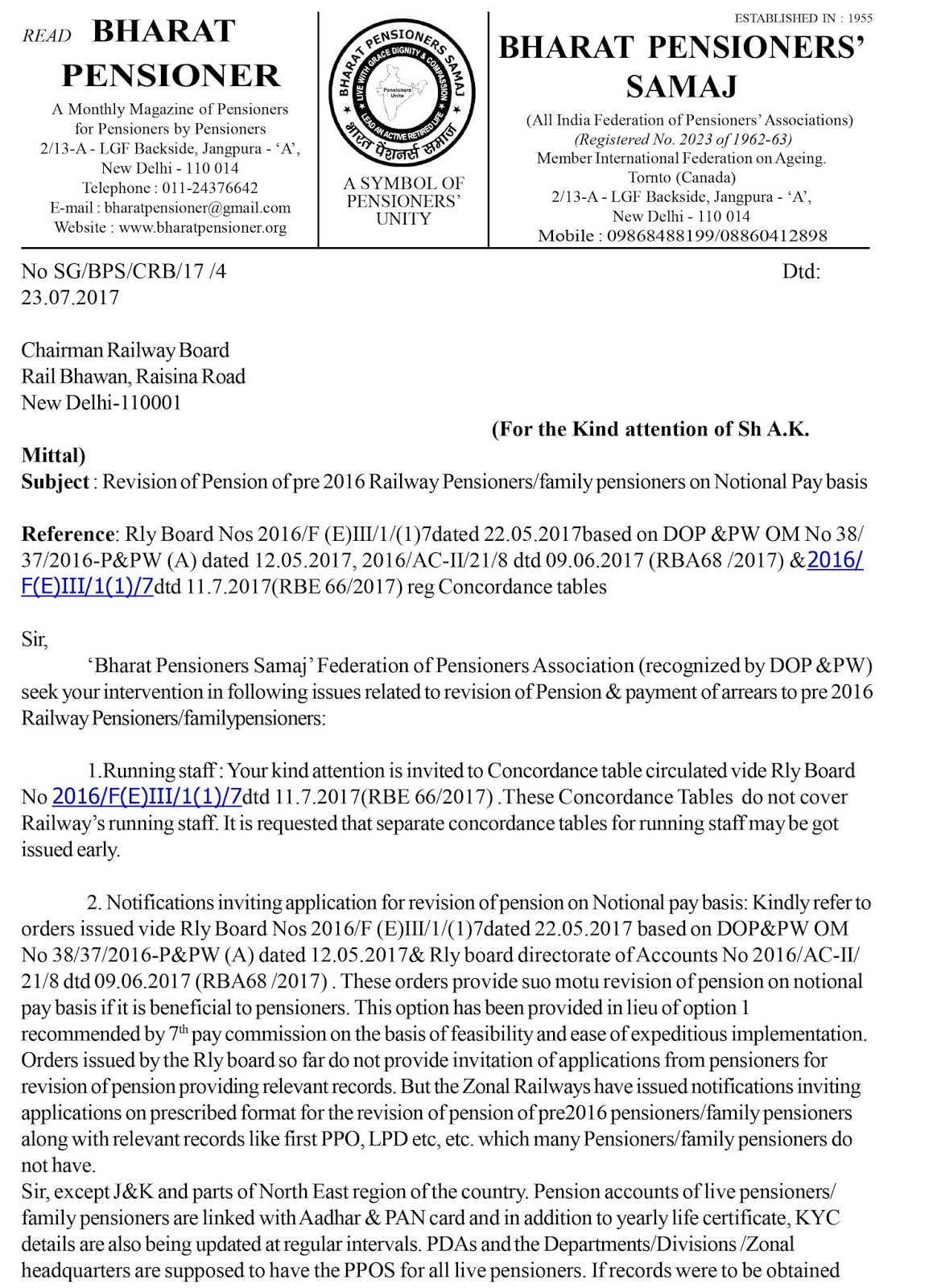 25.7.2017No need to apply for revision of pension of pre 2016 pensioners /family pensioners- Clarifies DOP&PW 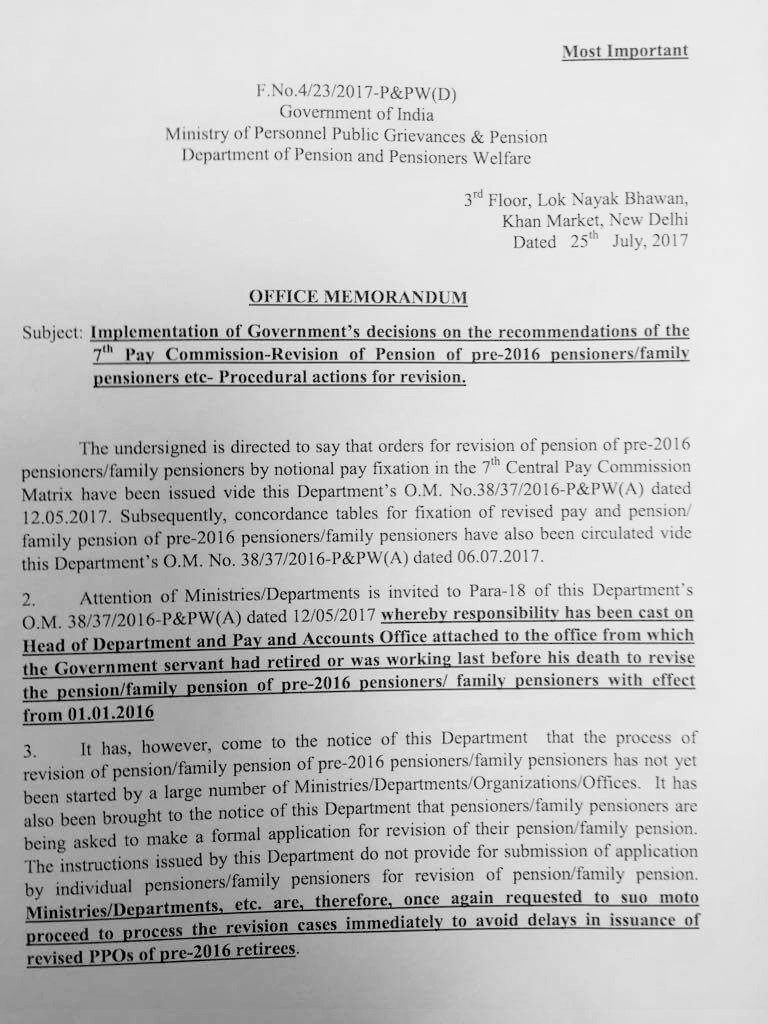 - July 23, 2017
GOVERNMENT OF INDIA MINISTRY OF LABOUR AND EMPLOYMENT LOK SABHA UNSTARRED QUESTION NO: 67 ANSWERED ON: 17.07.2017 Facilities to Retiring Persons SUKENDER REDDY GUTHA Will the Minister of LABOUR AND EMPLOYMENT be pleased to state:- (a) whether the Government has decided to settle the PF/EPF, Gratuity etc. of the retiring person on the day of retirement itself; and (b) if so, the details thereof along with the steps taken/being taken in this regard? ANSWER MINISTER OF STATE (IC) FOR LABOUR AND EMPLOYMENT (SHRI BANDARU DATTATREYA) (a) & (b): Directions have been issued by Employees’ Provident Fund Organisation (EPFO) to all its field offices to make the payment of Provident Fund and Pension to members of Employees’ Provident Funds (EPF) Scheme, 1952 and Employees’ Pension Scheme (EPS), 1995 on the date of retirement itself. As regards settlement of gratuity, as per Payment of Gratuity Act, 1972, the employer shall arrange to pay the amount of gratuity within thi
Post a Comment
Read more 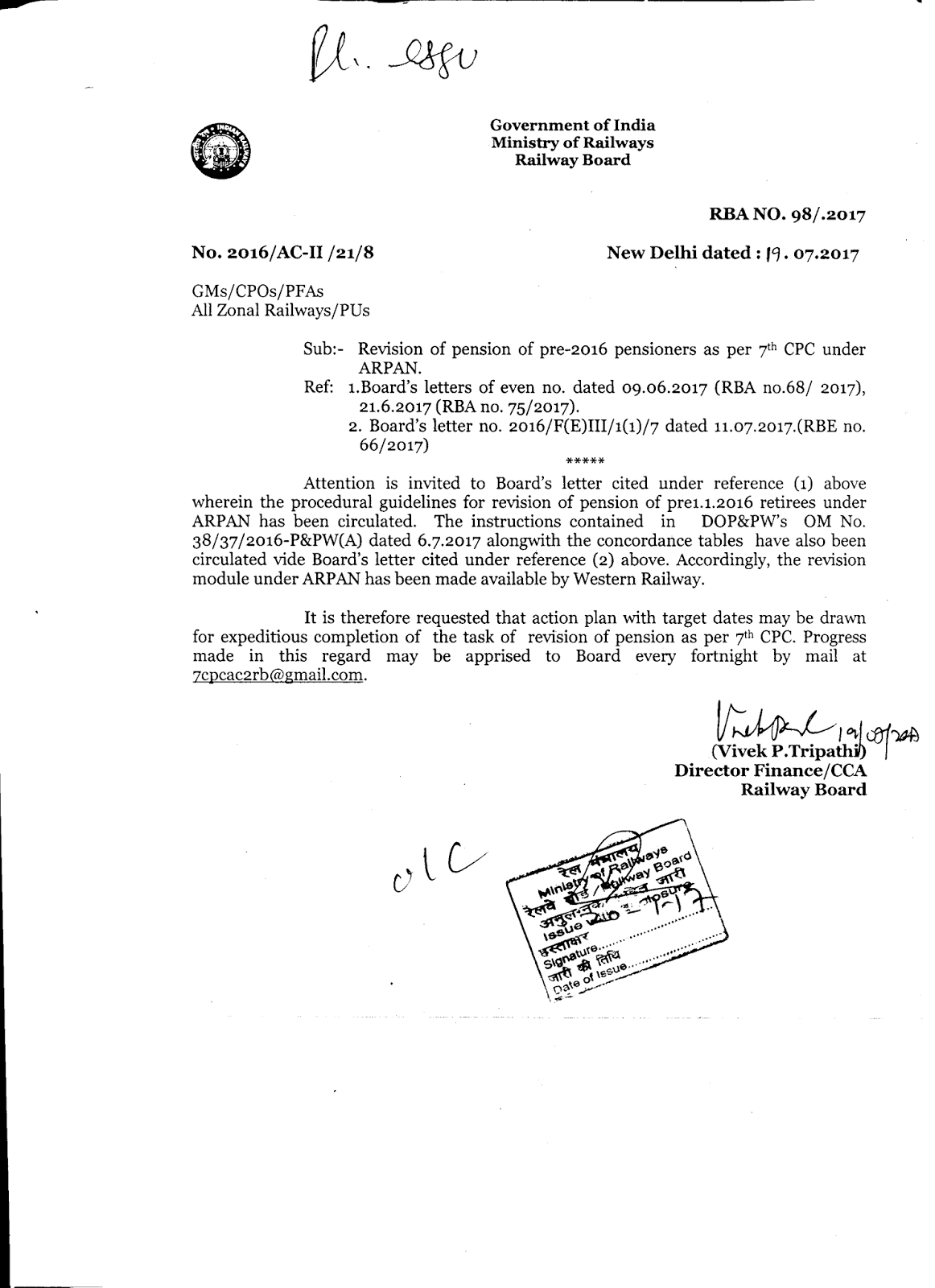 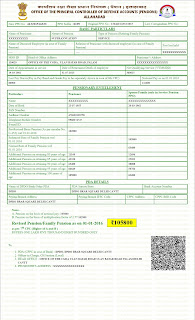 OFFICE OF THE PR. CONTROLLER OF DEFENCE ACCOUNTS (PENSIONS) DRAUPADI GHAT, ALLAHABAD- 211014 Circular NO. C- 169 No: G1/C/0199/Vol-I/Tech Dated: - 11.07.2017. Sub: Implementation of Govt. decision on the recommendations of the Seventh Central Pay Commission-Revision of Pension of Pre-2016 Pensioners / Family Pensioners etc. Ref: This office important circular no. C-153, bearing no. G1/C/0199/Vol-1/Tech, dated 12th August 2016. Attention is invited to above cited circular wherein all Pension Disbursing Authorities (PDAs) were advised to revise the Pension/ Family Pension of all pre-2016 pensioners with effect from 01.01.2016, by multiplying the pension/ family pension as had been fixed at the time of implementation of 6th Central Pay Commission (CPC) recommendations, by a factor of 2.57. The amount of revised pension/family pension so arrived at was to be rounded off to next higher rupee.  2. Now, Govt. Of India, Ministry of P, PG and pension, Deptt.
Post a Comment
Read more

Enhancement of rates of Marriage Grant from Rs.16000 to Rs.50000 per daughter: DESW Order 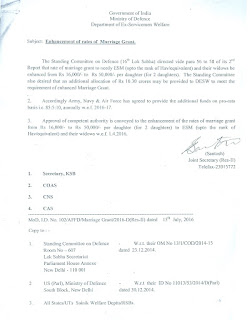 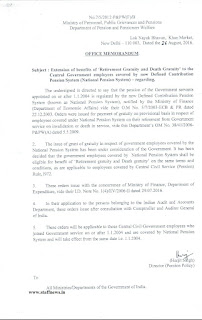 - July 22, 2017
Office of the Principal Controller of Defence Accounts (Pension), Draupadi Ghat, Allahabad-211014 Circular No.192 No. AT/Tech/30-XVIII Dated: 06.07.2017 Sub: Difficulties being faced by the Family pensioner at the Pension Disbursing Agency (PDA) about furnishing of Non-Marriage Certificate.  Instructions for payment of family pension and submission of Non-Marriage/Re-Marriage certificates from defence family pensioners (including Defence civilian family pensioners) are provided in Para 39 of DPPI-2013 and para 12.3 & 12.4 of Scheme for Payment of Pension of Defence Pensioner by Public Sector Banks revised edn. 01.01.1987.  Periodicity of submission of Non-marriage/ re-marriage certificate for various kinds of recipients of family pension is different. Difference in periodicity of submission of certificate was a cause of inconvenience to the family pensioners and was attracting representations from various agencies. Accordingly, the matter was referred to the
Post a Comment
Read more 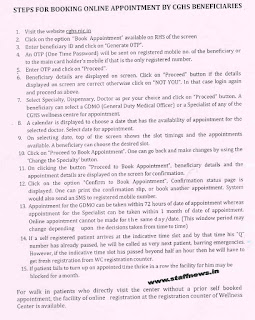 F. No. 44/ 22 /2014/MCTC/CGHS/2211-44 Directorate General of CGHS, MOHF Monitoring, Computerization & Training Cell, CGHS Wellness Center Building, 15th Floor, Kalibari, New Delhi-110001 Dated: 9.5.2017 Office Memorandum Sub:  Online Appointment System for CGHS beneficiaries For the convenience of CGHS beneficiaries and with an objective of reducing the waiting time at the Wellness Centers, CGHS is pleased to announce a new initiative of booking online appointments. Existing beneficiaries can now book an appointment for Medical Officer or, Specialist consultation online. The steps involved in booking an appointment online are given below  Online Appointment by Beneficiary himself Visit the website cghs.nic.in Click on the option “Book Appointment” available on RHS of the screen Enter beneficiary ID and click on “Generate OTP". An OTP (One Time Password) will be sent on registered mobile no. of the beneficiary or to the main card holder
Post a Comment
Read more 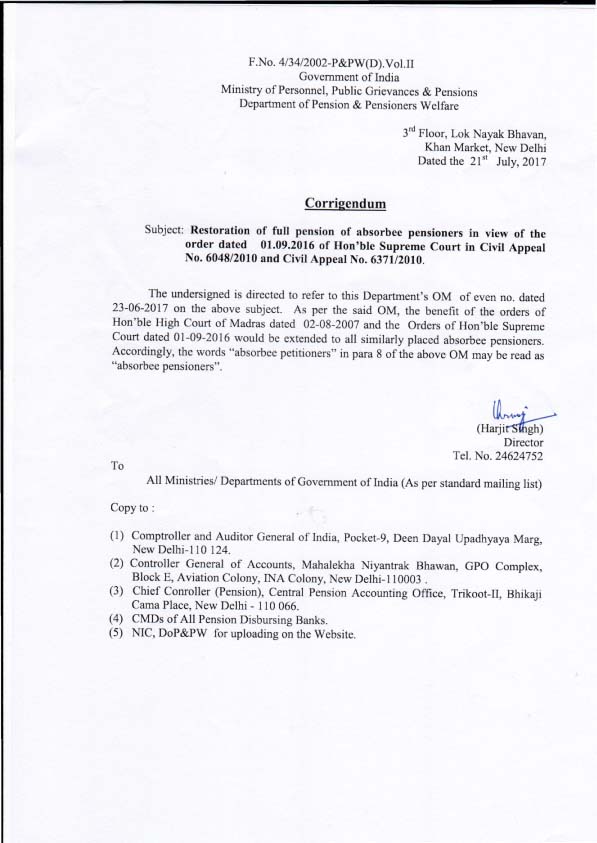 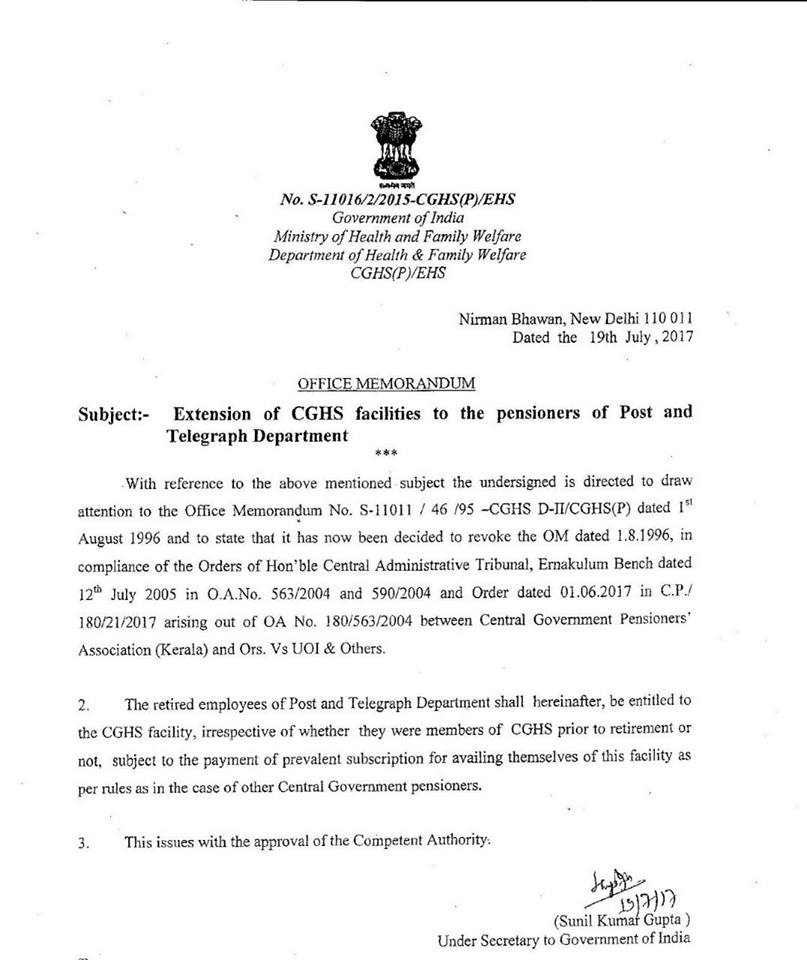 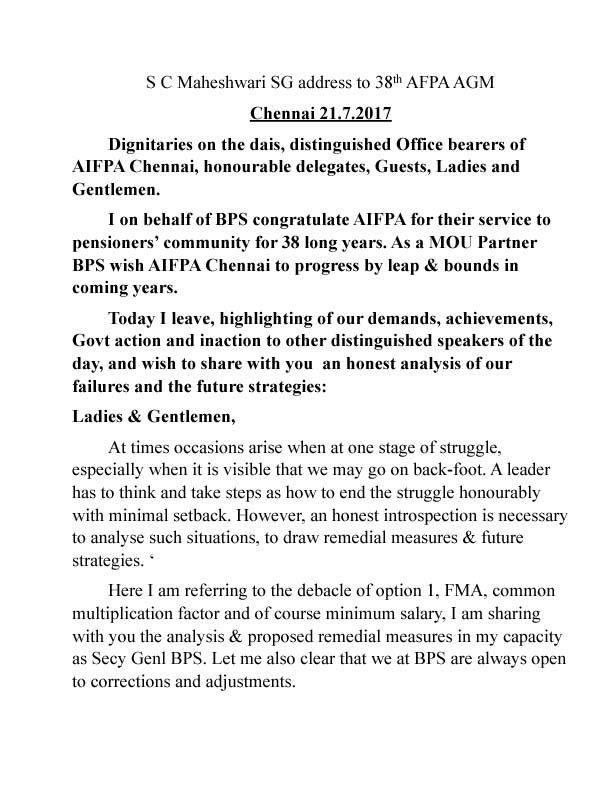 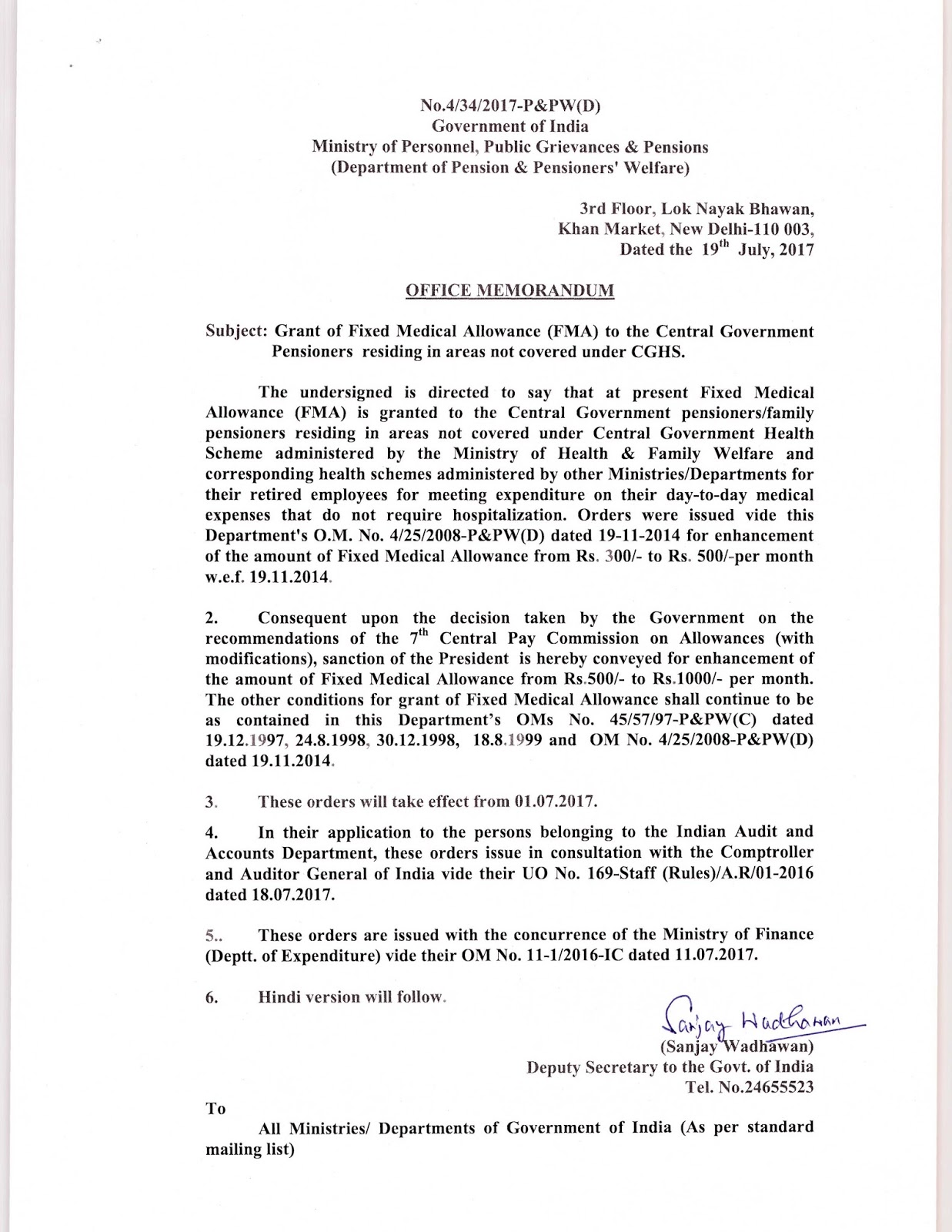 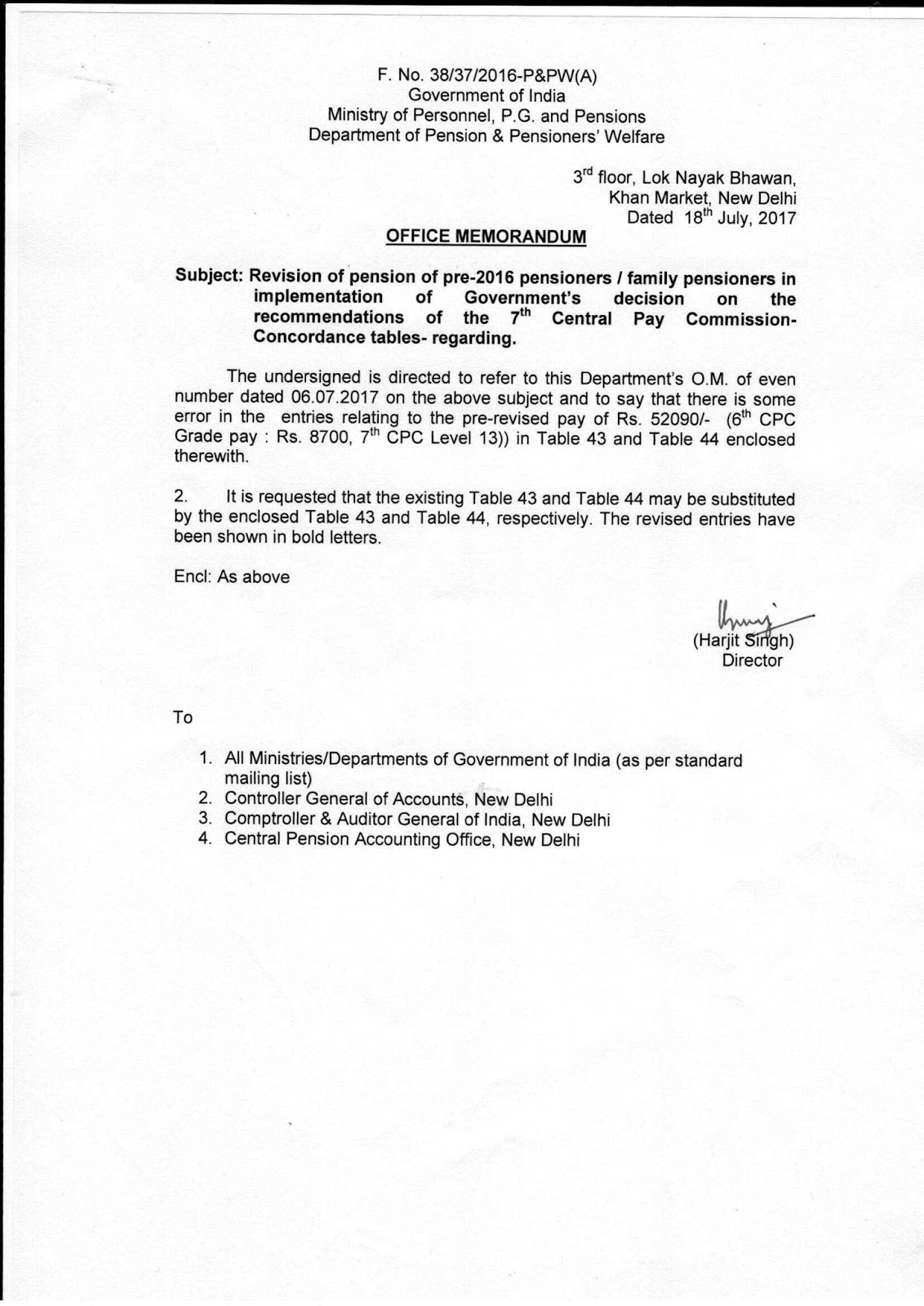 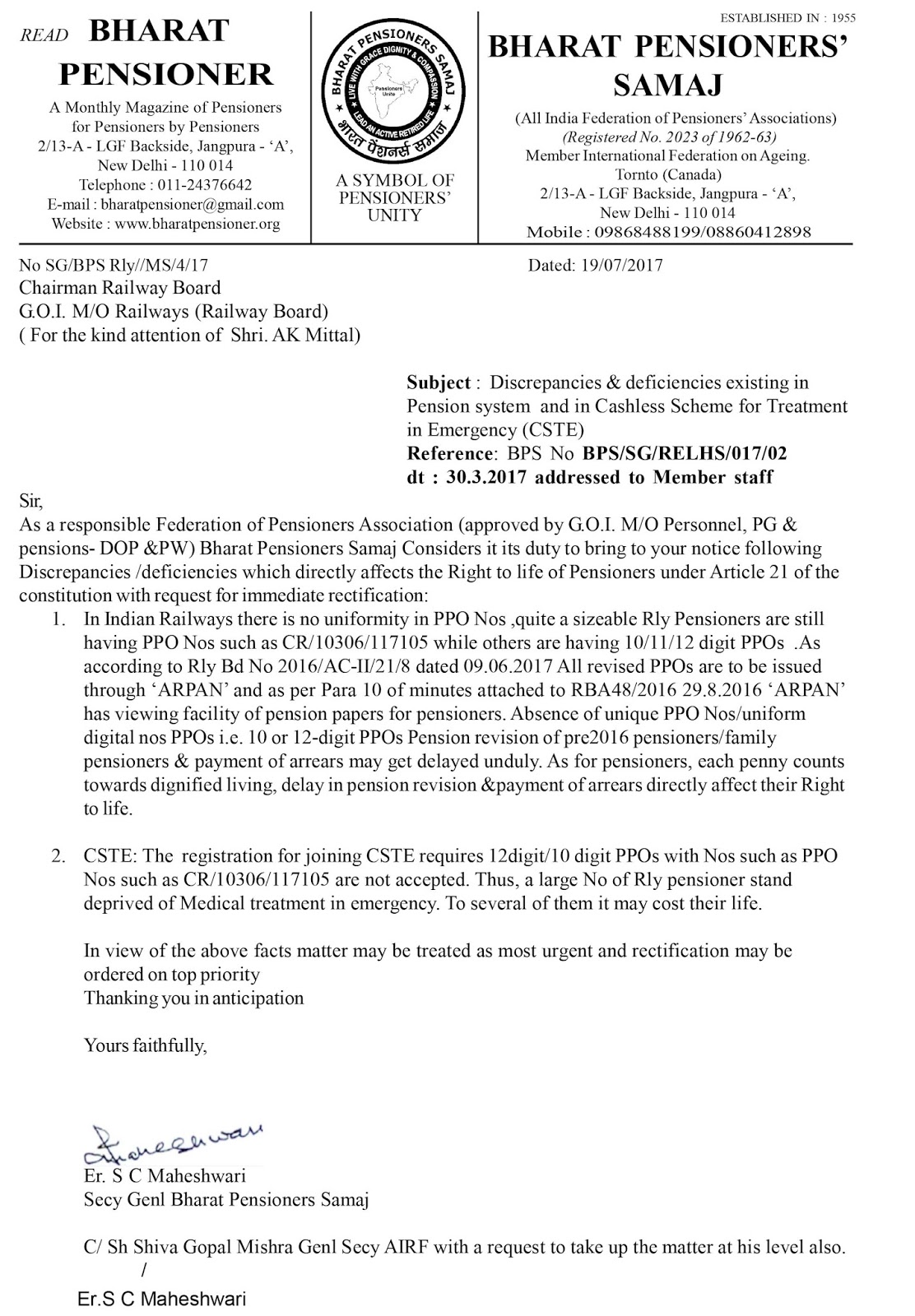 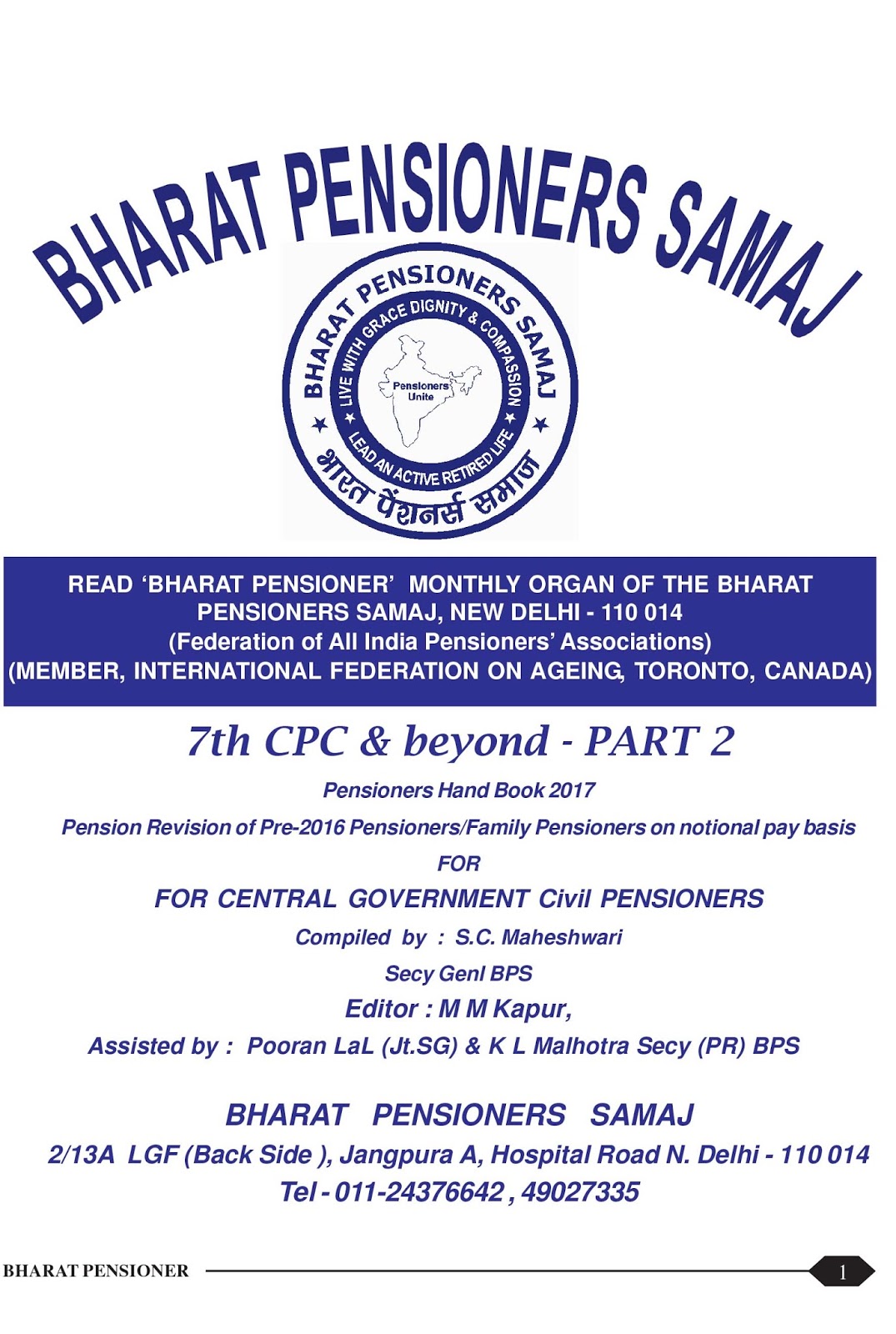 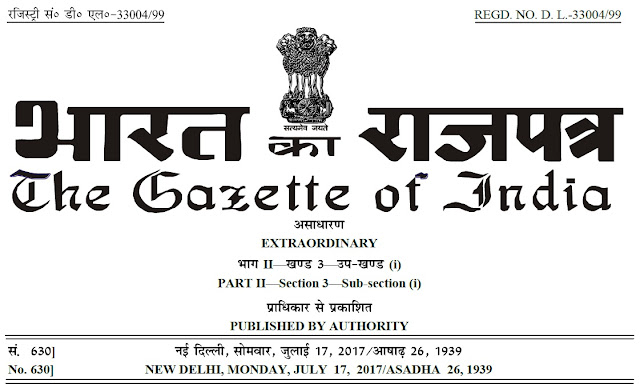 MINISTRY OF RAILWAYS  (RAILWAY BOARD)  NOTIFICATION New Delhi, the 14th July, 2017  RBE No. 70/2017  G.S.R.882(E).—In exercise of powers conferred by the proviso of Article 309 of the Constitution, the President hereby makes the following rules in amendment to the Railway Services (Revised Pay) Rules, 2016 namely : - 1. (1) These rules may be called Railway Services (Revised Pay) Amendment Rules, 2017.  (2) They shall be deemed to have come into force on the 1st day of January, 2016. 2. In the Railway Services (Revised Pay) Rules, 2016, - (a) In rule 12, for the words “the date of notification of these rules”, the following shall be substituted, namely: - “1st January, 2016 and the same shall apply to the pay of officers coming on deputation to posts in the Central Government which are not covered under the Central Staffing Scheme.”; (b) In the Schedule, - (i) for PART A, the following PART shall be substituted, namely;- Pay Mat
Post a Comment
Read more 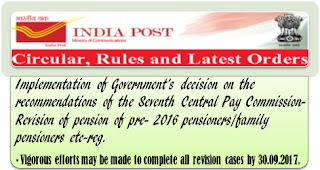 No. 4-3/2017-Pension Government of India Ministry of Communications Department of Posts (Pension Section) Dak Bhawan, Sansad Marg, New Delhi - 110 001 10th July, 2017 To All Head(s) of Circles All General Manager (Finance)/Director of Accounts (Postal) Sub: Implementation of Government’s decision on the recommendations of the Seventh Central Pay Commission- Revision of pension of pre- 2016 pensioners/family pensioners etc-reg. Sir/Madam, Kindly refer to this office letter of even number dated 23.5.2017 circulating DoP&PW O.M. No. 38/37/2016-P&PW(A) dated 6.7.2017 regarding implementation of Government decision for revision of pension of pre-2016 pensioners/family pensioners. 2. Department of Pension & Pensioners Welfare has circulated O.M. No. 38/37/2016-P&PW (A) dated 6.7.2017 concordance tables for fixation of notional pay and pension/family pension of employees who retired/died in various grades during the 4th ,
Post a Comment
Read more
More posts