Showing posts from February, 2012
Show all

Strengthening of SCOVA & representation of Pensioners in NAC & JCM-DOPT reply. 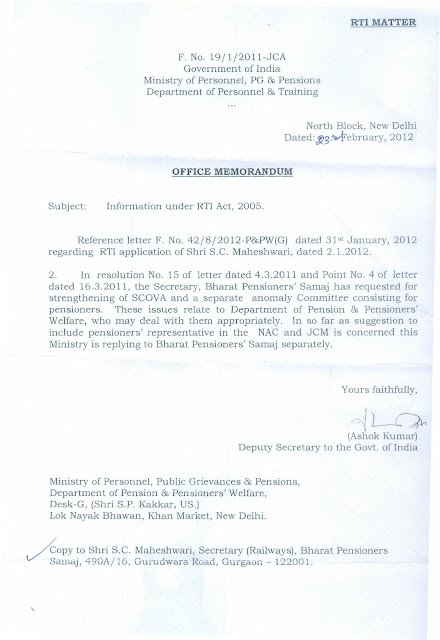 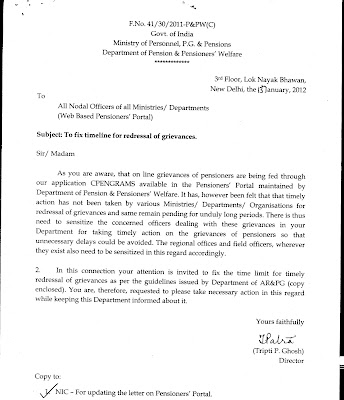 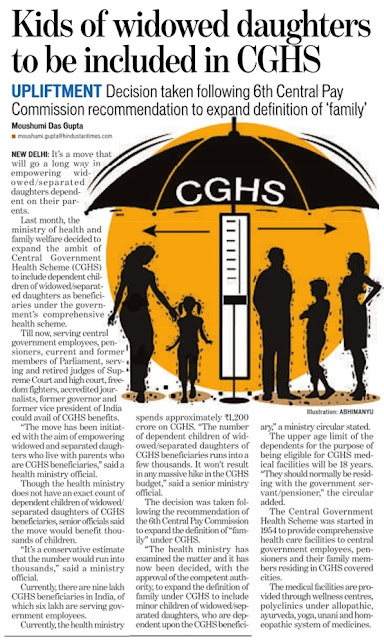 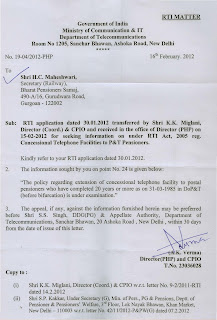 - February 21, 2012
CBDT exempts return-filing for salaried having total income upto Rs 5 lakh Income TaxNotification NOTIFICATION NO 9/2012, Dated: February 17, 2012 In exercise of the power conferred by sub-section (IC) of section 139 of the Income-tax Act, 1961 (43 of 1961), the Central Government hereby exempts the following class of persons, subject to the conditions specified hereinafter, from the requirement of furnishing a return of income under sub-section (1) of section 139 for the assessment year 2012-13, namely:- 1. Class of persons.- An Individual whose total income for the relevant assessment year does not exceed five lakh rupees and consists of only income chargeable to income-tax under the following head,- (A) “Salaries”; (B) “Income from other sources”, by way of interest from a saving account in a bank, not exceeding ten thousand rupees. 2. Conditions,- The individual referred to in para 1,- i) has reported to his employer his permanent Account Number (PAN); ii
Post a Comment
Read more

- February 20, 2012
25% elderly population depressed' TNN Feb 12, 2012, 03.31AM IST NEW DELHI: One in every four among India's elderly population is depressed, and one in three suffers from arthritis, while one in five cannot hear. While one in three suffers from hypertension in rural India and one in two in urban areas, almost half have poor vision. Around one in 10 experiences a fall that results in fracture, while two in five are anemic. One in 10 in rural India and two in five in urban areas suffer from diabetes, with nearly 31% suffering from bowel disorders. With the Union health ministry's "Health Problems in the Elderly" estimates not painting a pretty picture, allocation to take care of the country's rocketing geriatric population could see a 300% jump in the next Plan. According to the report of the Union health ministry's working group on non-communicable disease burden for the 12th five-year Plan, while in the 11th Plan Rs 1, 000 crore was allocat
Post a Comment
Read more

- February 20, 2012
Indian Pensioners - Persecuted The Pensioners' Portal of the Government of India reads as follows: "Senior Citizens are a treasure to our Society. They have worked hard all these years for the development of the Nation as well as the community. They possess a vast experience in different walks of life. At this stage, they need to be taken care of and made to feel special". The truth on the ground, unfortunately strikes a contrast with the proclaimed ideals. Instead of the pensioners taken care of in their twilight years of life, they are subjected to merciless attack. There are 11 million pensioners out of 480 million working people covered under Pension Schemes. The Government is attacking these pensioners in a consistent manner. They are forced to approach various High Courts, Administrative Tribunals and Supreme Court for justice and even if the honorable Courts give judgments in favor of the Pensioners, appeals and Special Leave Petitions are made by the
Post a Comment
Read more

- February 19, 2012
Minimum pension could be ` 1,000 PTI RETIREMENT fund body Employees’ Provident Fund Organisation ( EPFO) may take a final decision on fixing the minimum pension for its subscribers at ` 1,000 per month during a meeting of the Central Board of Trustees ( CBT) scheduled on February 22. EPFO’s apex decision- making body CBT could fix minimum pension at ` 1,000 per month for its subscribers at a meeting this month, All India Trade India Congress secretary D. L. Sachdev told reporters. Sachdev, who is also an EPFO trustee, informed that the proposal is listed on the agenda for the CBT meeting. The trustee said that CBT will also discuss the proposal to issue contribution cards similar to bank passbooks to its over 4.72 crore subscribers, which would be updated on monthly basis from April 1. According to EPFO data, as of March 31, 2010, there were 35 lakh pensioners subscribed to the retirement fund body, of which 14 lakh persons get a monthly pension of less than ` 500. The number of E
1 comment
Read more

- February 16, 2012
Friends, As per Clause 2(f), in definition of Complaint, Grievances relating to the service matters of a Public Servant, whether serving or retired are specifically excluded. This is an injustice to retired persons who constitute very large portion of Citizens. Let us all strive to get this injustice rectified.Justification for inclusion of Pensioners is as following :- Serving public servants have definite negotiating instruments/ channels for redress of their issues. However, Pensioners have no other channel except the grievance redress mechanism of DOP &PW, which too is almost defunct, as toothless DOP &PW in the absence of sufficient powers is functioning like a Post Office. The concerned Ministries/Departments to whom DOP & PW forwards Pensioners Grievances, do not take these grievances seriously with the result that the complaints are not resolved even after a year or more. The greatest irony is: 1. That Pensioners/Family Pensioners are exploited, harassed &
Post a Comment
Read more 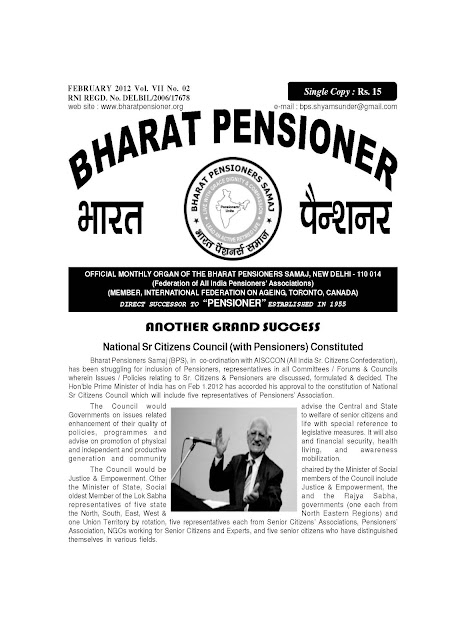 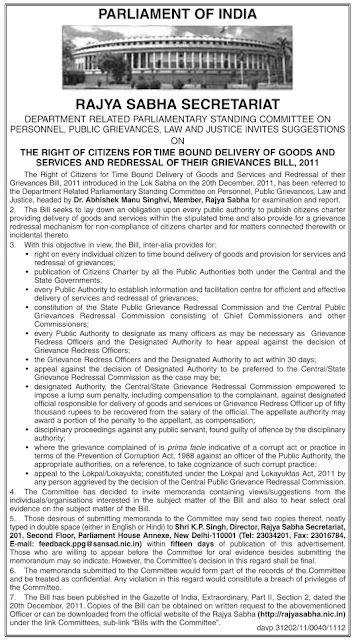 Friends, Let each one of  pensioners individually as well as from the organization submit Memorandum seeking amendment to the definition of complaint to include Pensioners.Those who have already submitted should submit again in response to this advertisement.
Post a Comment
Read more

- February 11, 2012
The Hindu : NATIONAL / TAMIL NADU : Consumer fora begin penalising PIOs   Consumer fora begin penalising PIOs MOHAMED IMRANULLAH S. SHARE   ·    PRINT    ·    T+    : In a move that is expected to have far reaching consequences, the consumer disputes redressal fora in various districts in the State have begun penalising government officials for delay in providing information under the Right to Information Act 2005. Welcoming such activism on the part of the consumer fora, RTI activists say that this was happening due to an authoritative order passed by the National Consumer Disputes Redressal Commission (NCDRC) in May 2009 wherein it was held that delay in providing information amounted to deficiency in service. S. Sampath, an RTI activist here, feels that directing the Public Information Officers (PIO) pay compensation under the Consumer Protection Act would go a long way in making them work briskly as the State Information Commission seldom punishes such officers despite an expres
Post a Comment
Read more

Tax relief slab may be raised to Rs 3 lakh

- February 09, 2012
The Times of India Tax relief slab may be raised to Rs 3 lakh NEW DELHI: Hiking the exemption slab for personal income tax from Rs 1.8 lakh to Rs 3 lakh, indexing rates to inflation and freeing assesses with up to Rs 5 lakh annual income from the burden of filing returns are among the recommendations being considered by Parliament's standing committee on finance. The draft report of the committee on UPA-2's ambitious Direct Tax Code is expected to suggest several amendments including linking tax slabsto consumer price indexes to allow an automatic adjustment of rates. The proposal to index tax rates to inflation can do away with the need to mention tax rates, even if they are unchanged, in the budget statement made by the finance minister every year. Tax rates the committee is expected to propose are 10% for the slab of Rs 3 lakh to Rs 10 lakh, 20% for upto Rs 20 lakh and 30% beyond that. Three crore assesses will stand to benefit from not having to file returns if t
Post a Comment
Read more

- February 09, 2012
The Times of India Haryana raises upper limit for old age pension Manveer Saini, TNN Feb 8, 2012, 06.58PM IST CHANDIGARH: While giving a major relief to senior citizens, Haryana chief minister,Bhupinder Singh Hooda on Wednesday announced to increase the limit of annual income from all sources for eligibility of a person under Old Age Samman Allowance Scheme from Rs 50,000 to Rs two lakh per annum. At present about 13 lakh beneficiaries are being benefitted under the scheme. Haryana social justice and empowerment minister, Geeta Bhukkal, hailed the decision saying that Hooda has been implementing a number of welfare schemes for all sections of the society.
Post a Comment
Read more

Another success for BPS

- February 05, 2012
Bharat Pensioners     Samaj (BPS)     In     co – ordination with AISCCON( All India Sr. Citizens Confederation ) has been struggling for inclusion of Pensioners representatives in all Committees /Forums & councils wherein Issues /Policies relating to Sr. Citizens & Pensioners are discussed formulated & decided.          The Honourable Prime Minister of India has on Feb.1. 2012 has accorded his approval to the constitution of National Sr Citizens council for Sr Citizens which will include five representatives of Pensioners’   Association          The Council would advise the Central and State Governments on issues related to welfare of senior citizens and enhancement of their quality of life with special reference to policies, programmes and legislative measures.            It will also advise on promotion of physical and financial security, health and independent and productive living, and awareness generation and community mobilization.         The Counci
1 comment
Read more

- February 01, 2012
Dearness Relief  is likely to rise by 7% from Jan 2012. The Total Dearness Relief is expected to be 65% as per the calculations.
Post a Comment
Read more
More posts