Showing posts from 2012
Show all

- December 31, 2012
Abstains from voting for an international legal instrument to protect older people, whose population is rising fast India, unlike its neighbours Sri Lanka and Bangladesh, remained undecided on a United Nations-sponsored international legal instrument to protect the “rights” and “dignity” of the older population — whose number is rapidly rising. Due to better health facilities, the number of older people in India will rise dramatically in the next four decades. According to advocacy group Agewell Foundation, the share of India's population aged 60 and older is projected to climb from about 100 million in 2010 to around 323 million by 2050 — higher than the total population of the US in 2012. “This profound shift in the very limited old-age income support brings with it a variety of social, economic, and health care policy challenges,” said Himanshu Rath of the foundation. As of now, the average life expectancy rate in India is 66.80 years. It was just 37 when India gained
Post a Comment
Read more

THE WRAP: Rural India suffered, public healthcare floundered Despite the best medical minds and hi-tech medical townships, India’s public healthcare delivery continues to flounder. World Health Statistics data 2012 showed that 39 million people in India are pushed into poverty each year and one of the reasons is expensive healthcare. Around 47% of all rural hospital admissions and 31% of admissions in urban India are financed by loans and sale of assets. Little wonder then that almost one in three people in rural India did not seek treatment because they couldn’t afford it. And yet India’s healthcare spending remains a shoe-string 4.2% of GDP, which means as many as 86.4% of medicals bills are mostly out-of-pocket spending or money people spend from their own savings. This makes India’s private spend among the highest in the world, comparing poorly not only with developed countries (US 23.4% and France 33.1%), and developing economies (Brazil 57.2% and Thailand 59.6%), bu
Post a Comment
Read more

- December 31, 2012
Government of India Ministry of Defence Department of Ex-Servicemen Welfare New Delhi the 14th Dec., 2012 To The Chief of Army Staff The Chief of Naval Staff The Chief of Air Staff Subject: Eligibility of Unmarried Daughters of Armed Forces personnel for grant of Family Pension beyond 25 years of Age. Sir, The undersigned is directed to refer to this Ministry’s ID No.878/A/D(Pen/Sers)/04 dated 21.9.2004 extending the provisions of Department of P&PW OM No. 1/19/03-P&PW (E) dated 25.08.2004 and this Ministry’s letter No.I (3)/2007-D(Pen/Policy) dated 25.10.07 which makes unmarried / widowed / divorced daughter eligible for family pension beyond 25 years of age subject to fulfilment of other prescribed conditions, Attention is also invited to this Ministry’s ID No.9(6)/2007-D(Pen/Policy) dated 21.2.2008 under which it was clarified in consultation with Department of P&PW that liberalised family pension/special family pension (dependent pen
Post a Comment
Read more

By Josh Schrei Strategist, Producer, Writer, Critic, Activist Trying to explain the core beliefs of "Hinduism" to an interested observer can be challenging to say the least. Its often stated that the word "Hinduism" itself is a total misnomer, as it basically refers to the sum total of spiritual and religious thought and practice that has taken place on the Indian subcontinent over the past 5,000 years. And lets just say it's been a busy 5,000 years. The sheer volume of spiritual literature and doctrine, the number of distinct gods worshiped (over 30 million, according to some sources), the breadth of distinct philosophies and practices that have emerged, and the total transformation over time of many of the core Indic teachings and beliefs can be disconcerting to those raised in monotheistic cultures, as we are used to each faith bringing with it a defined set of beliefs that -- with the exception of some denominational rifts over the centurie
Post a Comment
Read more 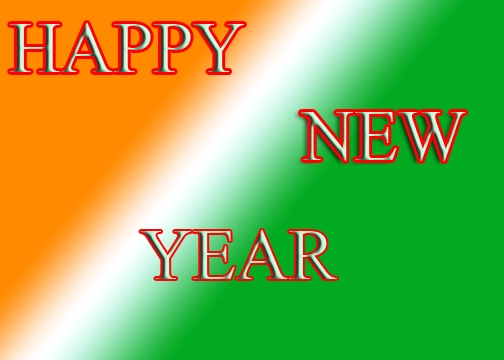 - December 28, 2012
AT LAST THE  MOD backed by the Powers in the Govt have issued the much awaited RANK PAY IMPLEMENTATION ORDERS. NEXT- WE CAN EXPECT THE " ORDERS” (With prospective effect) ON MODIFIED PARITY To read orders click the link:   Rank Pay implementation orders issued by the Ministry of Defence India https://docs.google.com/open?id=0BxzJmujVle3cY1o1M2NiWVRWSkU https://docs.google.com/open?id=0BxzJmujVle3cY1o1M2NiWVRWSkU
Post a Comment
Read more

Reimbursement of expenses on Dental treatment for Rly medical beneficiaries 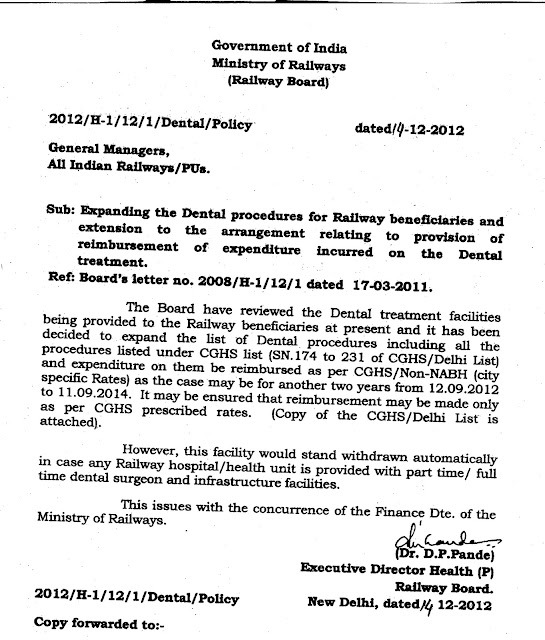 - December 22, 2012
PTI BHOPAL, DEC 22:  The Madhya Pradesh Government has set up a “Senior Citizen Commission” to look into the problems of the elderly in the State. The decision to set up the commission was taken during a Cabinet meeting which was chaired by Chief Minister Shivraj Singh Chouhan yesterday, an official release said. Chouhan, at a meeting of old people at his house in April this year, had announced to set up a commission for them and the Cabinet had yesterday approved it. Parliamentary Affairs Minister Narottam Mishra said the commission would comprise one Chairman and four members. He said the commission will after a look at the problems of the senior people of the State, and produce an ideal proforma for old persons’ policy for the welfare and solution of their problems.
1 comment
Read more

Wonder ! Where is Anna, Ramdeo, Kiaran Bedi & Kajeriwal. Why they hiding one of them shld hv come fwd to lead

- December 22, 2012
Delhi gang rape case: Teargas, water cannons used against protesters Girl protesters alleged that policemen hit them with lathis and declared they will launch a sit-in in the area. Wonder ! Where is Anna, Ramdeo, Kiaran Bedi  & Kajeriwal. Why they hiding one of them shld hv come fwd to lead
Post a Comment
Read more

FMA to Rly Pensioners-Rly Board orders 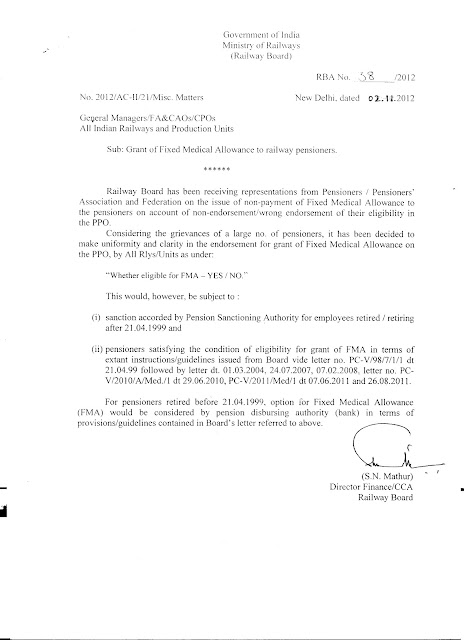 - December 18, 2012
Government Orders on Cabinet Decision on Pensionary Benefits to Ex-Servicemen to be Issued Next Month Describing the twin tasks of improving the pensionary and medical benefits for ex-servicemen as ‘subjects of prime concern’ and ‘as an ongoing process’, the Defence Minister Shri AK Antony today announced that the orders authorizing payment to ex-servicemen and their families accruing from the recent cabinet decisions, hiking pension and other benefits amounting to nearly Rs.2300 crores per annum, would be issued next month.   Addressing a meeting of the Consultative Committee attached to his Ministry, here, Shri Antony said this is the third time in the last four years that the Government have systematically improved the post-retirement benefits for ex-servicemen.   Outlining the slew of measures taken by the MoD for improving the health care benefits of ex-servicemen, Shri Antony said the Government has been trying to expand the delivery mechanism and simplify procedures so that t
Post a Comment
Read more

http://epaper.mailtoday.in/showtext.aspx?boxid=2115937&parentid=75248&issuedate=17122012 ‘ Peanuts’ pension plan for armymen By Jugal Purohit THE CENTRAL government has set aside ` 2,300 crore to meet the demands of ex- servicemen, fighting for increment in their pension and other retirement benefits. Of this sumptuous amount, however, the share of an ex- army havaldar with a service of 24 years ( and equivalents in the navy & air force) will be a measly ` 461 per month. This arithmetic was revealed after this correspondent accessed the current internal working sheets of the ministry of defence. The government, without revealing the precise calculations in its announcement on September 24, 2012, had claimed that it was setting aside ` 2,300 crore to meet the demands of the ex- defence personnel. The break- up of this big promise, however, has been a shocker for ex- servicemen who were hoping for remarkable improvement in their pension and other benefits. What’s more
Post a Comment
Read more

- December 16, 2012
NEW DELHI: You will now have to pay a   fine of up to Rs 500 if caught   littering   on   railways stations or in trains.   After the failure of several awareness campaigns, requests and sign boards to convince travellers to keep platforms and trains clean, the Railway Board has decided to prosecute offenders with a fine of up to Rs 500.   Throwing   garbage , urinating, bathing, defecating, washing utensils and clothes, feeding animals or birds on railway premises — station buildings, platforms, rail tracks and trains -- will be punishable according to a circular issued by the Railway Board to its zonal heads on Friday.   Putting up posters or writing in train compartments or railway premises will be treated as an offence according to the notification issued under Railways Act, 1989. Any one caught defacing railway property will also be penalized, a senior railway official said.   According to the new rules, authorized vendors and hawkers will have to make arrangements to keep was
Post a Comment
Read more

- Balwant Jain, CFO, Apnapaisa.com I recently read a news item on the  referring to the answer given in the Parliament on the question of     unclaimed money   is lying with the Indian Banks as on December, 2011.  It amounted to whopping sum of approx. Rs. 2481.39.cr. I could not stop myself relating to the death of my friend’s family member who had missed on making nomination in his salary account. . The said  report stated  that  a major portion of this   unclaimed money   belongs to Individuals, mainly attributing to the death of account holder. Probably they were not conscious about availing the nomination facility, or postponed it to later   date only   to meet the untimely death later. This has not only deprived their legal heirs but also posed a problem for the banks to manage these   unclaimed funds . To combat this double edged problem, the Government of India amended the   banking laws   in 1983 to provide for nomination facilities in respect of  all   banking acco
Post a Comment
Read more

- December 13, 2012
Oct 3, 2012, 12.00AM IST   TOI rage life expectancy in India jumped up by 4.6 years in the decade up to 2008, according to the latest data released by the Registrar General of India. Since this was also the period when economic reforms had the maximum impact, it gives the lie to an idea that's pervasive in the political domain - that reforms benefited only a tiny elite, leaving the rest of India's population untouched (or even worse off than before, going by some highly excitable accounts). The steady improvement in life expectancy at birth of the average Indian to 66.1 years by 2008 highlights steady improvement in overall living conditions and the general success of reforms. What makes these gains more impressive are their inclusive character, with women and the rural population making more substantial gains. While women's life expectancy improved faster to 67.7 years that of men rose more slowly to 64.6 years. This is especially significant given that life
Post a Comment
Read more