Showing posts from March, 2013
Show all

- March 29, 2013
Dear Friends, Bharat Pensioners Samaj the largest & oldest organization of Indian Pensioners with441 affiliated Associations works to be the nodal point for highlighting difficulties faced by pensioners and Sr. Citizens & is now a global point of connection for experts and expertise in the field of Pension, Pensioners grievances and elderly issues, it is for this reason I am writing to you about our social media.  The BPS is present on Facebook , Twitter , blog & bps1955yahoo group  & is also available on video conferencing  to  promote the latest initiatives, to raise awareness on current and emerging  issues and to keep the stake holder  up-to-date on our growing activities. Promoting organizational activities and informing stakeholders is our job so we encourage sharing                     our  Facebook page  and  following us on Twitter ! as well as video conference  with Secy.Genl. If you have any question or concerns, and/or would like to share informati
Post a Comment
Read more

Age is not just a figure

29 Mar 2013 Hindustan Times (Delhi) Lalita.panicker@hindustantimes.com Age is not just a figure Our respect and caring for the elderly is very much a part of our collective hypocrisy. Geriatric care is a very grey area in India, writes LALITA PANICKER In the disturbing movie, The Ballad of Narayama directed by Shohei Imamura, the elderly are the victims of a supposedly ancient Japanese tradition. Having outlived their utility at the age of 70, they are taken by their kinsfolk to a desolate and remote place and left to die of exposure to the elements or starvation. Now this may be an imaginary place but in an extreme manner it raises the plight of the elderly in societies that do not have any safety net for them. In India, we have been happy to deceive ourselves that ours is a caring society where the family will take care of its elderly, paying them back for the sacrifices that they have made to strengthen and nurture the family unit. Indeed, in many Hindi movies, the
1 comment
Read more

PENSION -Not a burden on the Government

Nainital HC Judgment, which is has settled a very favourable legal issue of date of implementation of SCPC Report. It has been clearly stated in this Judgment that any other date, other than 1.1.2006, is discriminatory.

- March 25, 2013
Nainital HC Judgment, which is has settled a very favourable legal issue of  date of implementation of SCPC Report. It has been clearly stated in this Judgment that any other date, other than 1.1.2006, is discriminatory. You can access the file at the URL: http://in.groups.yahoo.com/ group/BPS1955/files/Nainital% 20HCJ%2015.3.13%20for%201.1. 2006.pdf Click here to download &read the judgement.
Post a Comment
Read more 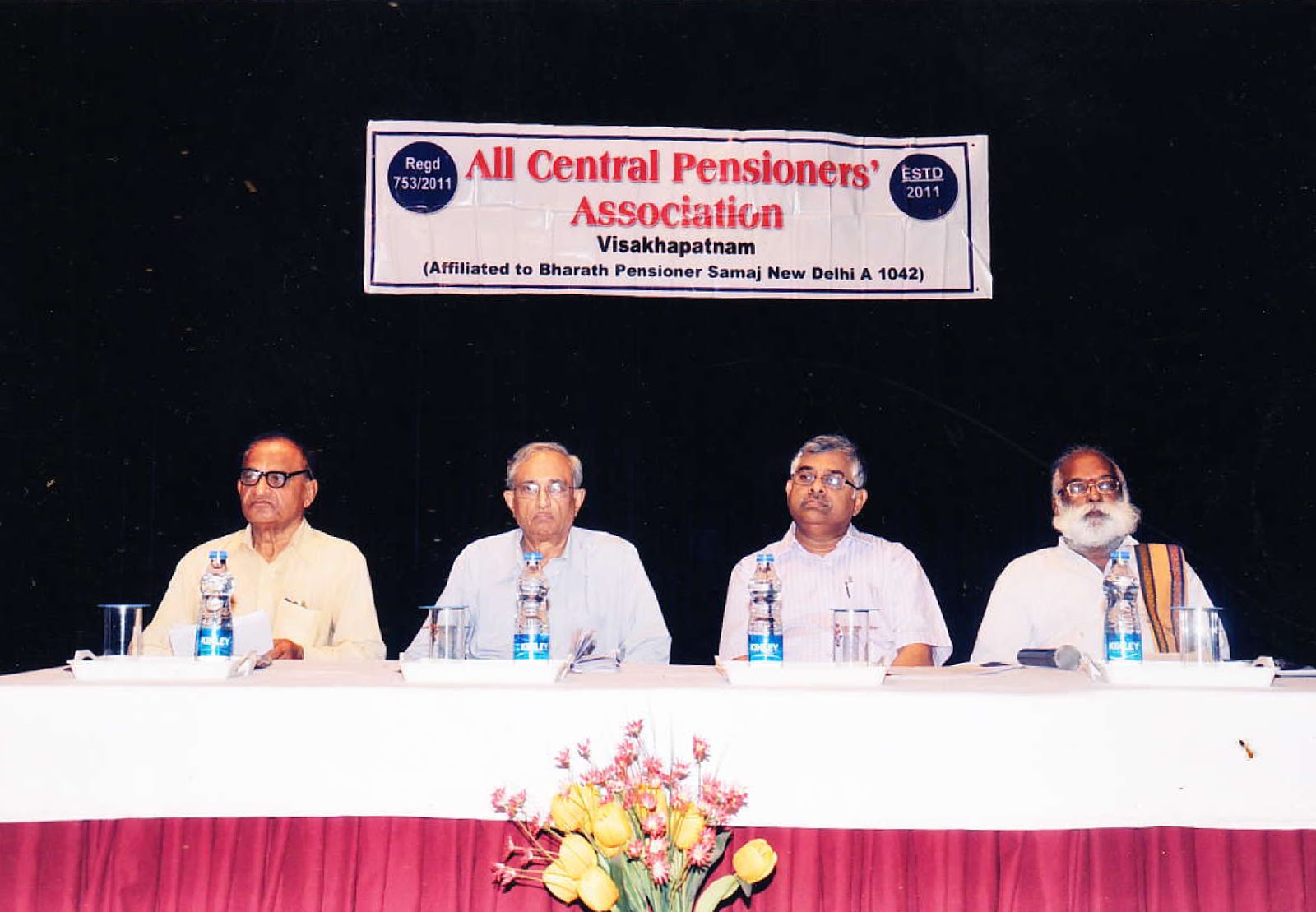 ACPA VIZAG First Anniversary function of All Central pensioner's Association, Visakhapatnam, Andhra Pradesh (an affiliate of Bharat Pensioners Samaj) was held on 05-01-2013 at ,,MANAS| AUDITORIUM" Naval Science & Technological Laboratory. Shri S. V. Rangarajan, outstanding Scientist, Director N.S,T.L. was the Chief Guest and Shri E.A.S.Sarma l.A.S (Retd.) Former Secretary, Ministry of Finance, Govt.. of India was the Guest of Honour. About 400 Central Govt. Pensioners retired from various Central Govt. Departments and members of our Association were present.15 senior citizens of 80 plus were honoured by Chief Guest, Guest of Honour, and the President of our Association Shri. O. V. Subbiah. The Following resolutions were adopted by the General body. a) Same Fitment benefit to all Pre-2006 Central Govt, Pensioners as given to working employees b) Parity in pension between Pre & Post - 2006 Central Govt. Pensioners. c) Merger of 50% dearness relief with Basic Pen
Post a Comment
Read more

Drugs still being approved without clinical trials By Dinesh C. Sharma in New Delhi IT’S ‘ business as usual’ at the drug controller general’s office despite the criticism it was subjected to in the report of the parliamentary standing committee on health last year. The drug controller is still approving new drugs without clinical trials using its undefined discretionary powers — the very practice for which it was reprimanded by lawmakers. As many as 15 new drugs have been recommended for approval without any clinical trial and nine of them have been approved since the committee’s recommendation came in May 2012. Drugs can be approved without clinical trials on Indian patients only in case of medical emergencies or when there is no alternative available. The drug controller general works through a set of 12 drug advisory committees which screen applications from drug companies. Between May and November 2012, these committees approved 15 new drugs without asking
Post a Comment
Read more

- March 16, 2013
17 Mar 2013 Hindustan Times (Delhi) Aloke Tikku atikku@hindustantimes.com MAKEN BACKS DEMAND FOR 7th PAY PANEL In a move aimed at putting the demand for the 7th Pay Commission on the government’s drawing board, Union minister Ajay Maken has asked Prime Minister Manmohan Singh to set it up this year to neutralise the effect of soaring inflation. His demand this week is the first voice in support of the panel from within Singh’s cabinet. “Erosion of real wages owing to the degree of inflation... is hurting employees,” he wrote in a letter accessed by HT. Retail prices rose 160% during 20062011 but dearness allowance went up only 51%. Besides, Maken argued, it was time to rework the principles on which public sector wages were fixed in order to attract and retain talent. He said it was no longer enough to pay employees to simply meet minimum needs. The finance ministry, struggling to bring fiscal deficit under control, has rejected demands from government employees to
Post a Comment
Read more

Something for everyone in new policy Sayli Udas Mankikar , Hindustan Times Mumbai, March 08, 2013     Email to Author First Published: 02:06 IST(8/3/2013) Last Updated: 02:07 IST(8/3/2013) Children of single mothers, who are divorced, widowed or estranged, may no longer have to mention their father's name on school and college forms. Institutes will need to make changes to their forms to accept the mother's name as the head of family, says one of the many provisions   in the new women's policy to be presented by women and child minister Varsha Gaikwad to chief minister Prithviraj Chavan at a Women's Day function to be held at Pune on Saturday. Other proposed provisions include construction of toilets on highways at every 50 kilometres or a distance of one hour. Also, considering the large number of women who are over 65 years old and live alone - either unmarried, widowed or divorced - the state plans to bring in a special pension scheme for
Post a Comment
Read more

- March 07, 2013
Govt to hike old age pension HT Correspondent , Hindustan Times New Delhi, March 08, 2013 In what comes as a minor relief to the senior citizens, the government on Thursday stated that it would enhance the old age pension to   Rs.  300 from the present   Rs.  200 per month. However, the pensions could be indexed to inflation, on the pattern of MG-NREGA wages, thus allowing increase in amount with price rise. The statement from rural development minister Jairam Ramesh in the Rajya Sabha comes as elderly people from across the country stage protests at Jantar Mantar demanding higher pensions. National Advisory Council member Aruna Roy is leading the protest under the banner Pension Parishad. The government further stated that it is mulling universalisation of pensions by removing the BPL and APL distinction, as applicable now.  Changes could also be brought in widow pensions to cover widows above 18 years instead of present 40 years. People with 40 percent disability
Post a Comment
Read more

- March 06, 2013
Taking into consideration Govt's negative reply appended here under. BPS is actively considering to file a court case claiming equal % rise in pension of all pre 2006 pensioners who constitute one homogeneous group of Pensioners and for raising Fixed medical allowance to Rs 1200/- GOVERNMENT OF INDIA MINISTRY OF  FINANCE RAJYA SABHA UNSTARRED QUESTION NO-191 ANSWERED ON-09.08.2012 Seventh Pay Commission for Central  Government employees 191 . SARDAR BALWINDER SINGH BHUNDAR (a) whether Government intends to constitute the Seventh Pay Commission for the Central Government employees; (b) if so, by when; (c) whether the Thirteenth Finance Commission has also recommended for an increase in pay of Central Government employees  from the future  date; and (d) if so,  the details  thereof? ANSWER MINISTER OF STATE IN THE MINISTRY OF FINANCE (SHRI NAMO NARAIN MEENA) (a)&(b): Government has not taken any decision on the constitution of the Seventh
Post a Comment
Read more
More posts