Showing posts from July, 2016
Show all

- July 28, 2016
MINISTRY OF FINANCE (Department of Expenditure) NOTIFICATION New Delhi, the 25th July, 2016 MEMORANDUM EXPLANATORY TO THE CENTRAL CIVIL SERVICES (REVISED PAY) RULES, 2016 Rule 1-  This rule is self-explanatory. Rule 2-  This rule lays down the categories of employees to whom the rules apply. Except for the categories excluded under sub-rule (2), the rules are applicable to all persons under the rule making control of the President serving in Departments paid from Civil Estimates. They do not apply to the employees under the Ministry of Railways and civilian personnel paid from Defence Services Estimates, for whom separate rules will be issued by the Ministries concerned. The rules do not also apply to Gramin Dak Sevaks in the Department of Posts. The rules, however, apply to work charged establishments. Rule 3 and 4-  These rules are self-explanatory. Rule 5-  The intention is that all Government servants should be brought over to the revised pay structure e
Post a Comment
Read more 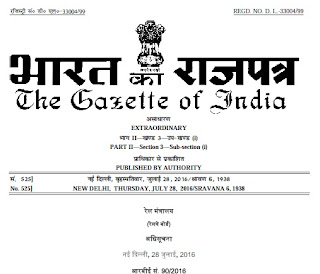 Railway Services (Revised Pay) Rules, 2016 Notification: RBE No. 90/2016 Railway Services (Revised Pay) Rules, 2016 Notification: RBE No. 90/2016 MINISTRY OF RAILWAYS (Railway Board) NOTIFICATION New Delhi, the 28th July, 2016 RBE No. 90/2016 G.S.R. 746(E). — In exercise of the powers conferred by the proviso to article 309 of the Constitution, the President hereby makes the following rules, namely:- 1.  Short title and commencement  : -  (1) These rules may be called the Railway Services (Revised Pay) Rules, 2016.  (2) They shall be deemed to have come into force on the 1st day of January, 2016.  2.  Categories of Railway servants to whom the rules apply: -  (1) Save as otherwise provided by or under these rules, these rules shall apply to persons appointed to Railway services.  (2) These rules shall not apply to : -  (i) Permanent employees of former Indian States absorbed in Railway Services so long as such persons continue
Post a Comment
Read more
More posts