Showing posts from August, 2012
Show all
- August 31, 2012
Reduction in Pension and Recovery from Pension already paid. Reduction in Pension and Recovery from Pension already paid.By M. L. Kanaujia, IRSSE, CCE/N.E.Railway(Rtd.) There is lot of confusion on the subject of Reduction in Pension already sanctioned and Recovery from Pension already paid. 1. Central Govt. Pensioners except Railway : 1.1. With regard to pensioners governed by the CCS(Pension) Rules 1972, the Rule 8 provide for clearly the provision in this respect. According to this, the pension cannot be reduced, once sanctioned and no recovery from pension can be done, except , in case a pensioner has been convicted of serious crime by a Court of law or pensioner has been found guilty of grave misconduct, that too, after following the laid down procedure. 1.2 The expression `serious crime' includes a crime involving an offence under the Official Secrets Act, 1923 (19 of 1923). 1.3 The expression `grave misconduct' includes the communication or disclosure of any sec
Post a Comment
Read more

- August 31, 2012
GOVERNMENT OF INDIA MINISTRY OF  HEALTH AND FAMILY  WELFARE RAJYA SABHA Health insurance for CGHS beneficiaries UNSTARRED QUESTION NO-1775 by SHRI BASHISTHA NARAIN SINGH a) whether it is a fact that in the year 2010, Government mooted a plan to provide health insurance scheme to its serving and retired employees; (b) if so, the present status of that scheme; (c) whether it is also a fact that beneficiaries including Members of Parliament are not getting required medicines from dispensaries specially Ayurvedic dispensary of North Avenue and elsewhere; and (d) if so, by when Government would seriously consider providing  health  insurance cover  to CGHS beneficiaries in order to provide better healthcare? ANSWERED ON-28.08.2012 (a) & (b): There is a proposal for introduction of a health insurance scheme for central government employees and pensioners on pan-India basis with special focus on pensioners living in non-CGHS areas. As per the directions of the ‘Committee of Secretaries’
1 comment
Read more 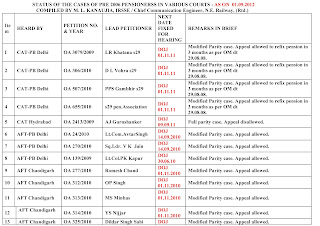 - August 31, 2012
Extension of CGHS facilities to KV teachers Extension of CGHS facilities to KV teachers similarly as being extended to KVS(HQ) and KVS(Regional Office) staff and extension of CGHS facility to KVS employees at par with retired Government of India employees, AIKVTA pointed out in the JCM meeting of KVS. Teachers should also be granted CGHS facility as is being provided to KVS HQ and Regional Office Staff. The CGHS benefits available to Government of India employees after their retirement should also be available to retired KVS employees as is being extended to NCERT employees. Comments of KVS : The matter for extending CGHS facilities to all the KVS employees was taken up by the Sangathan with the Director, CGHS and the have informed that the matter was referred to the Ministry of Health and Family Welfare and who has opined that it is the policy of the Government not to extend facilitites to new category of beneficiary but consolidate only to those available to existing
Post a Comment
Read more

Committee to Look into Pay and Pension Grievances of Military

PAY SCALE OF URC EMPLOYEES AT PAR WITH EMPLOYEES OF CSDs

- August 31, 2012
PAY SCALE OF URC EMPLOYEES AT PAR WITH EMPLOYEES OF CSDs Press Information Bureau  Government of India Ministry of Defence  30-August-2012 17:06 IST Pay Revision of URCs Employees The Unit Run Canteen (URC) employees are getting paid as per the rules regulating the terms and conditions of the services of the civilian employees of the URCs, issued by Army Headquarters in April 2003. These rules were made as per the directions of Hon'ble Supreme Court of India dated 4th January 2001, in the case of Union of India Vs. M. Aslam and others.  It has been held by the Hon'ble Supreme Court, in its order dated 28.4.2009, in the case of R.R. Pillai vs. Commanding Officer HQ SAC (U), that employees of URC are not Government Servants. Hence, the benefits of Sixth Pay Commission are not applicable to them. However, the basic pay of URC employees was enhanced by 50% w.e.f. 1.2.2009 and by another 15% w.e.f. 1.12.2009.  This inform
Post a Comment
Read more