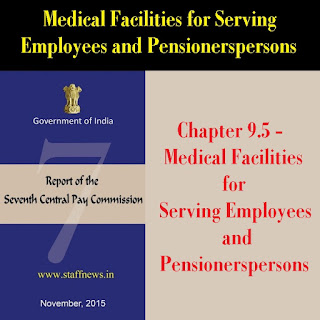 9.5.2CGHS, under the aegis of Department of Health andFamilyWelfare, provides out-patient (OPD)/in-patient (IPD) treatment to its beneficiaries–both serving and retired employees– within its area of operation. Serving employees of the Central Government, outside CGHS area and thus not under its coverage, avail medical facilities under CS (MA).

9.5.3 CS (MA) Rules, 1944 are statutory provisions for medical relief to the serving Central Government employees and their family members who are not residing in CGHS covered cities. There is a provision for appointment of Authorized Medical Attendants (AMA) by the concerned department for their employees either from the Medical Officers working under the State/Central Government or from private practitioners depending upon the situation.

9.5.4 Pensioners are not covered under the CS (MA) Rules. Pensioners residing outside CGHS areas are entitled to Fixed Medical Allowance (FMA) @ Rs.500 per month for their OPD/IPD needs. Such pensioners can also avail IPD/OPD under CGHS subject to some conditions, details of which have been explained in a subsequent paragraph.

9.5.5Duringits interactions with various stakeholders, the Commission has received numerous demands relating to medical facilities. Broadly, these demands are as follows:

a. CGHS should be expanded and improved: It has been demanded that facilities offered by CGHS should be strengthened and more private hospitals should be empanelled in such a way that they are nearer to the residence cluster of the beneficiaries.

b. Pensioners be treated at par with serving employees: It has been represented that CS(MA) be extended to pensioners residing outside CGHS Area. It has been demanded that Smart Cards be issued to all pensioners for availing cashless medical facilities across the country in all government hospitals, all accredited Multi Super Speciality Hospitals which have been allotted land at concessional rates, all CGHS, (Ex-Servicemen Contributory Health Scheme (ECHS) empanelled Hospitals.

c. It has been demanded that the amount of FMA be raised to Rs.2,000 with DA thereon.

d. It has been pointed out that P&T pensioners who did not subscribe to CGHS while in service are not covered under CGHS post retirement. It has also been demanded that all P&T dispensaries should be merged with CGHS so that these pensioners can avail IPD/OPD benefits.

Analysis of the Demands

9.5.6 CGHS has benefited a significant number of government employees and pensioners. The Commission notes that the pressure on CGHS has been increasing over the years. This has affected its efficient functioning at times. However, the Commission is aware that services provided by CGHS are valued by a number of employees and most of the pensioners.

9.5.7 The demands of the various stakeholders, listed above, have been analysed keeping these facts in the backdrop. Broadly, these demands can be classified into three segments: (i) Expansion of CGHS to more areas, (ii) Strengthening of the existing facilities under CGHS, and (iii) Provision of medical facilities for pensioners living outside CGHS areas.

Expansion of CGHS to More Areas

9.5.8 CGHS is presently operational in 25 cities. The government is opening at least one CGHS Wellness Centre in 12 more cities. The Commission notes that with this addition, almost all the state capitals will be covered under CGHS.

9.5.9 The VICPC had recommended that all postal dispensaries should be merged with CGHS and all postal employees including retired postal employees be covered under CGHS wherever available. It is noted that out of 52 postal dispensaries, 19 have been merged with existing CGHS centres. During his presentation, DG, CGHS highlighted scarcity of resources, particularly that of manpower, due to which government is not in a position to extend CGHS to more areas. The Commission feels that modalities should be worked out to utilise the existing manpower of the postal dispensaries and steps should be taken to merge the remaining 33 postal dispensaries with CGHS. This will benefit a large number of postal employees and pensioners. This will also benefit those Central Government employees/pensioners who are otherwise eligible for coverage under CGHS but are being denied this facility because of absence of CGHS centres in their cities. The Commission feels that Ministry of Health and Family Welfare’s order dated 1 August, 1996 - which states that P&T pensioners who were not participating in CGHS while in service may not be extended medical facility under CGHS - is discriminatory and should therefore be revoked. This would enable all P&T pensioners, irrespective of their participation in CGHS while in service, to avail medical facilities under CGHS after making requisite subscription.

Strengthening of the Existing Facilities under CGHS

9.5.11 CGHS, thus, has indeed been catering to a sizeable population of government employees. However, there are many limitations on this count. The Commission notes that financial constraints, non-availability of sufficient health care professionals and other administrative limitations impede rapid expansion of CGHS to more areas or strengthening of its services. Even with the limited expansion, possiblyalargenumberof employees/pensioners will still remain uncovered given their spatial distribution.

9.5.13 In case of emergency, pensioners, under the second and the third options, can take treatment in aprivate hospital empanelled under CS(MA)/Ex-Servicemen Contributory Health Scheme (ECHS) or any private hospital in the domicile city. However, such pensioners will have to make payment upfront for their treatment and thereafter seek reimbursement from CGHS. This reimbursement is capped at CGHS rates.

9.5.14 Various pensioners’ associations have demanded that CS (MA) Rules should be extended to cover Central Government pensioners residing outside CGHS areas. As referred to earlier, CS (MA) Rules do not cover the pensioners. The Commission notes that the VICPC was not in favour of extending CS (MA) to the pensioners on the grounds of huge financial implications and administrative difficulties relating to submission and reimbursement of bills.

9.5.16 The Commission observes that in view of the recommendations of the earlier Pay Commissions and various high power committees, the government has been contemplating the introduction of a health insurance scheme on Pan-India basis. The Commission notes that although the Committee of Secretaries had given its ‘in principle’ approval way back in 2011, and an amount of Rs. 2,061 crore had been earmarked under the XII Five Year Plan, the Scheme has still not been implemented.

9.5.17 The Commission notes that given the tardiness in the introduction of the long awaited Insurance Scheme, as already mentioned earlier in this chapter, the pensioners residing outside CGHS area will continue to be at a disadvantage, in terms of medical facilities, compared to their counterparts residing in CGHS areas. As stated earlier in this chapter, according to existing provisions, pensioner residing outside CGHS area but subscribing to CGHS for OPD/IPD can avail medical facility from any hospital–private or public or empanelled under CS (MA)/ECHS–in his/her own city. However, in such cases, the pensioners have to make upfront payment to the hospital and claim reimbursement later. The Commission feels that this could be a limiting factor for many pensioners who may not have the resources to pay hospital expenses upfront. The Commission notes that under CS (MA) Rules/ECHS, there are empanelled hospitals in every part of the country, at least in all major locations. In this backdrop, after identification of some major centres/cities based on minimum population threshold of pensioners, these hospitals could be empanelled by CGHS as well, for extending medical facilities on a cashless basis.

9.5.18 Considering all the issues, the Commission makes the following recommendations:

i. The Commission strongly recommends the introduction of health insurance scheme for Central Government employees and pensioners. In the interregnum, for the benefit of pensioners residing outside the CGHS areas, the Commission recommends that CGHS should empanel those hospitals which are already empanelled under CS (MA)/ECHS for catering to the medical requirement of these pensioners on a cashless basis. This would involve strengthening of administrative capacity of nearest CGHS centres. However, this step will go a long way in ameliorating the pending grievances of these pensioners.

iii. Currently, there are various health care schemes in the Central Government catering to specific sets of employees. For example, apart from CGHS, there are Ex-Servicemen Contributory Health Scheme (ECHS) and Railways Employees Liberalized Health Scheme (RELHS) which cover ex-servicemen and Railway employees/pensioners, respectively. Although the patterns in these schemes vary, a combined entity of CGHS-ECHS-RELHS would result in a very strong network of health facilities for the Central Government employees across the length and breadth of the country. The Commission recommends that possibility of such a combined network of various medical schemes should be explored through proper examination. 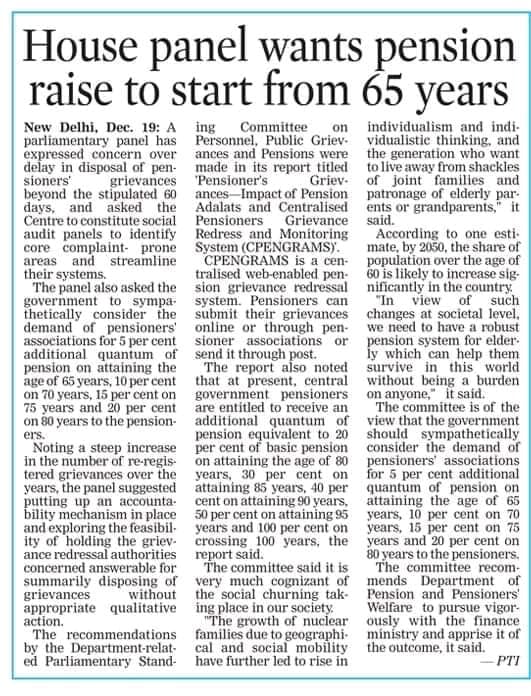 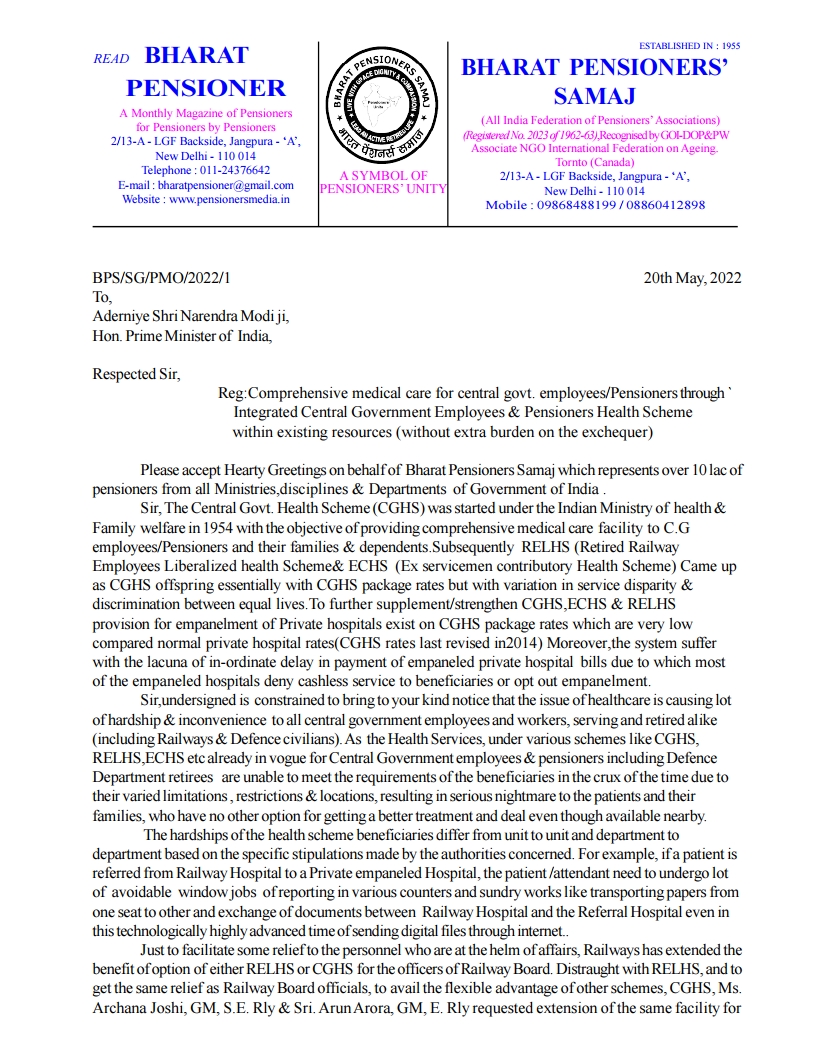