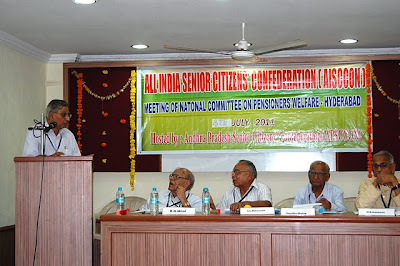 Pensioners Movement in
Bharat Pensioners Samaj (BPS) & All Sr. Citizens Confederation (AISCCON)
Join hands to ensure welfare of retired persons in
In a meeting Of National Pensioners Welfare committee –AISSCCON held on 4.07.2011 in Lions Bhawan Secunderabad (AP) Under the Co -chairmanship of Sh. R.N. Mittal President AISCCON & S.C.Maheshwari G.S. RREWA & Secretary Bharat Pensioners Samaj numerous problems of EPS 1995, KVS ,GIC, , Rly. Defence & Central Govt Pensioners as well as those Industrial Workers were discussed. Keeping in view the huge magnitude of problems & grievances, both the pioneer organizations resolved to join hands to mitigate grievances of over 100 million retired persons of
AISCCON also decided to co ordinate with BPS & to devote one full session to retired persons issues during their at Vishakhapatanam on 21st & 22nd Nov.2011
Minutes of the National Committee on Pensioners Welfare meeting on
National Committee on Pensioners welfare, headed by Sri SC Maheshwari, set up by AISCCON, met on 4th July in Lions Bhavan Hyderabad. Following were on the dais: Sri RN Mital, Sri SC Maheshwari, Sri AG Gholap,Sri MBKulkarni . Sri S.C. Maheshwari presided. About thirty persons representing senior citizens organisations and Pensioners Welfare organisations participated. Following points were discussed.
Welcome Address by Prof Vishwesariah  [ Vice President, All  Senior Citizens Confederation (AISCCON)]. He welcomed the participants to the first meeting of this Committee and explained the motive behind setting  up  of four National Committees .
Sri R.N.Mital,[President, AISCCON], in his short address explained the purpose of setting up the National Committee on Welfare of Pensioners under the Chairmanship of Sri S.C.Maheshwari who being the Secretary  of Bharat Pensioners’ Samaj, is highly knowledgeable and well informed about their problems. He emphasized that we were fortunate in having  Sri Maheshwari as the Chairman of this Committee and Mr Ananth Gholap, [Vice President AISCCON], as the Convener and  stressed that Pensioners constitute more than 50% of the literate segment of Senior Citizens which is a very significant number. Therefore, their problems and concerns are our problems. He further stressed that many of the anomalies in payment of pensions and provision of facilities to different sectors of pensioners, fell within the definition of violation of Human Rights and amounted to gross injustice. He emphasized that AISCCON at national level will fight against such disparities  shoulder to shoulder with Bharat Pensioners’ Samaj.
Presidential Address by Sri S.C.Maheshwari  -  Sri Maheshwari in his Presidential address  appreciated the remarks of Sri Mital and stressed that the purpose of this meeting,   being the first, is rather exploratory; to identify the problems of different sectors of Pensioners based on the complaints and representations received by AISCCON during the last six months or so.  In addition to identifying the problems, he said the focus of our discussion will be the apparent injustice shown towards the  /KVS retirees and the denial of health care facilities to them.
Introductory remarks by Sri Ananth Gholap – Sri Ananth Gholap in his address explained the problems faced by Pensioners and said that in many cases they caused severe hardship. It was a complex situation and to remedy it joint action by AISCCON and various Pensioners’ associations was called for. He then explained the Agenda and how  it will be handled.
Agenda Point 1]   Pensioners at par with CG pensioners. - Sri Gholap highlighted that 80+ pensioners in Central Government are given 20% extra while this is denied to State pensioners in . It was decided that FESCOM will take it up with the State Government and the Committee would follow up and support.
Agenda Point 2] CGHS facilities for KVS pensioners. - A detailed note was presented by Sri V Satyanarayana. CGHS facilities which were extended to KVS pensioners was suddenly stopped in 2003. Though had decided fully in favor of KVS pensioners that this must be continued,  went in appeal (despite a caveat in place) and got permanent stay;  unless this stay is vacated nothing can be done.  Efforts must be made to get the stay vacated and then AISCCON and BPS can step in.
Agenda Point 3] Enhancement of Pension under EPS95 scheme. Sri PL Menon explained that Several thousands of employees have been getting meager amounts of Rs 600 to Rs 800 as pension as a part of EPF. This has to be increased. Finance Ministry and Labour Ministry have to be approached. Dr. P. Vyasamoorthy was asked to give a detailed note
Agenda Point 4] Enhancement of Ex Gratia to C.G retirees who did not opt for Pension. - Sri Somasekar Rao described the difference between optees and non-optees in the case of CG retirees in Railways. He suggested that entire pension fixation should be based on certain broad principles like minimum pension, periodic revision etc.
Agenda Point 5]  Parity in pension of pre 2006 Pensioners - Sri Chandramouli explained the problems of retirees before 2006 and after that cut off date. Matter is being pursued at various levels.
Agenda Point 6] Facilities to pensioners in Banks, Post offices etc  like separate counters etc: Sri Chapke said that RBI has issued guidelines in this regard; State level associations need to pursue this problem with banks concerned.
In the end the Chairman invited some senior members in the audience to express their views on this subject. Sri R.N.Datta, Vice President BPS, Sri M.B.Kulkarni, Sr.Vice President AISCCON, and  Sri S.C. Sharma, Vice President AISCCON spoke
The meeting concluded with a proposal of vote of Thanks and National Anthem.
Pensioners
Location: India